Kept by the Commanders Holds a Top 100 Spot 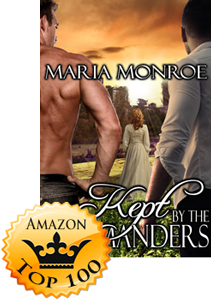 new book, Kept by the Commanders, has taken a spot in the Top 100 for Amazon’s Science Fiction Romance category! Congratulations Maria!

★★★★★ Amazon Customer @ Amazon.com “Great Story” on November 11, 2016
This was a great read from start to finish!
The characters are relatable, they were not perfect but had strength, courage and a lot of chemistry!! I so enjoyed it I stayed up most the night to read it start to finish!

★★★★★ Christine Campbell @ Amazon.com “Good n hot” on November 13, 2016
I am voluntarily reviewing this arc for Stormy Night Publications. She is being punished because she concealed the fact she was a female n she’s isn’t allowed to fight in a battle with the men due to her sex. The commanders that she is given to are each their own but both have a soft side. They punished her as they saw fit n would take care of her needs. Her attendent would see to her. However she was also going behind her commanders back n did her own planning n making her own weapons which turned out to be a good idea when they are attacked in the middle of the night. The men find out about it n rex took n punished her n when tye comes in he stopped it. Rex has his own reasons for her not in battle but she didn’t know of it. It was sensual and erotic

★★★★★ DP @ Amazon.com “Great Story” on November 14, 2016
I enjoyed this book about Lara and her two commanders. The book was set in the future. Lara was a strong young woman who had to fend for herself when her family was killed. She poses as a man and joins the village army. When she is found out she agrees to be taken in by the two commanders, Rex and Tye. She earns quite a few punishments. She was a strong woman but quite submissive when it came to these men. The two men were quite different with Rex being stern due to personal issues in his past. Tye was the softer of the two but she enjoyed both as they enjoyed her. The book was well written and I would definitely recommend. I received an ARC of this book from Stormy Night Publications in exchange for an honest review.