Kept for Christmas by Sara Fields 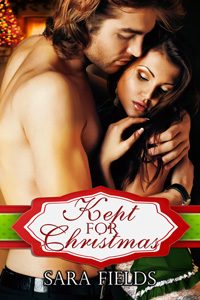 After Raina LeBlanc shows up for a meeting unprepared because she was watching naughty videos late at night instead of working, she finds herself in trouble with Dr. Eliot Knight, her stern, handsome boss. He makes it clear that she is in need of strict discipline, and soon she is lying over his knee for a painful, embarrassing bare-bottom spanking.

Though her helpless display of arousal during the punishment fills Raina with shame, she is both excited and comforted when Eliot takes her in his arms after it is over, and when he invites her to spend the upcoming Christmas holiday with him she happily agrees. But is she prepared to offer him the complete submission he demands?

Publisher’s Note: Kept for Christmas includes spankings and sexual scenes. If such material offends you, please don’t buy this book. This book is also available as part of a five-book collection entitled A Very Naughty Christmas.

“Get up, bend over the desk, and spread those naughty cheeks for me. I’ve got something that will ensure you don’t forget who’s the boss.”

Her body quivered at his promise. She was quick to obey him, only trembling when she reached back to touch the scalded flesh of her freshly spanked bottom. She clearly was moving too slowly, because she was rewarded with two hard spanks on both of her sit spots. Yelping at the sharp sting, she quickly gripped her cheeks and pulled them apart, revealing her tight rosette to him.

She blushed, realizing no one had had ever had a view of that particular part of her anatomy before. She had to admit that all the times she’d read about such things in her books, she’d been terribly turned on, but could never get the courage to ask any of the men she’d been with to explore her there. That list of men wasn’t particularly long, since she’d only had two boyfriends in her life and those relationships had been short-lived. She’d been too independent, too headstrong, and they were weak. Not like Dr. Knight. He was a real alpha male and he believed in spankings.

Quivering, she waited, unable to see what he was doing. She could hear him fumbling around in a drawer next to her and she jumped when a cool wet liquid drizzled onto her bottom hole.

“What are you doing, sir?” she asked, her voice trembling with her nerves.

His thumb pressed down on her tight little star, spreading the liquid around the rim of muscle in preparation for something more. His digit pressed into her and she squealed at the strangely painful and foreign feeling. He stretched her, yet she submitted to him and the sensation quickly turned pleasurable. Before long, he pushed into her with ease and he introduced a second finger. At long last, he paused and withdrew his hand.

“For what, sir?” she asked, trying to look back at him and feeling a bit confused.

“Eyes forward. You’re going to wear a butt plug for me.”

She whined when she felt a firm cool object press at her backdoor. With little mercy, he pressed it into her slowly but surely and she had no choice but to yield to him. She cried out at the widest point of the plug stretched her like never before.

“Open your bottom for me, naughty one, because someday soon I will fuck you here with my cock. I know that you’ll love it so much that you’ll beg me for it, time and time again.”

2016-12-15
+admin
Previous: Her Stern Doctor by Morganna Williams
Next: The Space Marshal’s Captive by Jaye Peaches