Don't Miss
Home / Blog / Kept for Their Use by Ivy Barrett

Kept for Their Use by Ivy Barrett 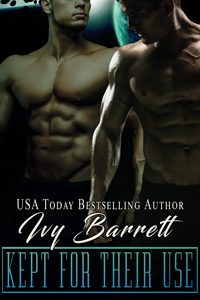 Jasmine Aldrich has spent years perfecting the art of enticing and manipulating men, but now two stern, sexy aliens have decided to claim her for themselves and she is totally unprepared for what is in store for her. These huge, handsome brutes aren’t just going to strip Jasmine bare and teach her what happens to a naughty little human who teases her mates. They’re going to punish, use, and enjoy her beautiful body as thoroughly, as shamefully, and as often as they please.

Kellan and Zilrath come from different worlds, but they plan to share Jasmine all the same, and she will soon learn the hard way that any attempt to play one of them off against the other will end with her cheeks blushing crimson and her bottom burning hot and sore both inside and out.

Despite her best efforts to keep control, as Kellan and Zilrath bring her to one quivering climax after another Jasmine finds herself surrendering ever more completely to their demands. But when a fellow human tries to turn her against them, will she side with her planet or her mates?

Publisher’s Note: Kept for Their Use is the sixth book of the Ventori Masters series. It includes spankings and sexual scenes. If such material offends you, please don’t buy this book.

His gaze drilled into hers as he slowly unfastened the belt wrapped around his waist. He’d taken the afternoon off, so he was dressed in jeans and a T-shirt. She watched the black leather slip through the first few loops, then snake around his waist. “Bend over the bed without bending your knees. Get that ass in the air.”

She stared at the belt as he bent it in half, heart thudding wildly in her chest. She shook her head. “Use your hand, please. I can’t—”

“You can and you will,” Kellan insisted. “Stop arguing, or I’ll go get my bag of implements.”

She looked at the daybed, then looked at Zilrath. He looked uncomfortable but resigned. He would not help her. Dread building with each step, she moved over to the daybed. Nothing she could say would change his mind. She knew Kellan well enough not to try persuasion. His mind was made up. He was going to spank her with that belt.

Shaking so badly her knees nearly buckled, she bent from the waist and braced her forearms on the thin mattress. She could see nothing but the muted geometric pattern of the comforter. She clenched her butt cheeks as the seconds ticked by. What was he waiting for?

“This is not what I want our lives to be,” Kellan said quietly. “But we must be able to trust our mate.”

“And she must trust us,” Zilrath added.

“Now a carnal companion only needs to obey,” he sneered out the comment, clearly upset by her careless words. “If she disobeys, she is punished until her behavior changes. There is no reason to worry about her emotions.”

She heard the subtle whoosh of displaced air, and then her left ass cheek exploded with stinging pain. She cried out sharply and twisted her hips, trying to escape the burning discomfort. Kellan swung the belt again and pain detonated in the right side as well. The first swat was still burning, so her entire bottom soon smoldered and ached.

And as usual, her traitorous clit suddenly echoed the throbbing pain. This hurt far worse than any of her other spankings. How could she possibly be turned on by something so demeaning? It was fucking twisted.

A harsh sob muffled her next scream as the belt struck again. She danced in place, humiliated as well as in pain. Her pussy fluttered, and she had no doubt she was getting wet. Would he fuck her when he was finished? God, she hoped so. Her need to come was almost worse than the fire in her ass cheeks.

He spanked her again, and she moaned. Her body was rapidly processing the pain, but she couldn’t fight her arousal. She tossed her head and wiggled her hips, but the painful spanks kept on coming.

She gradually stilled, grasping the comforter with both hands. She tried to calm her raging emotions as well. She was breathing much too fast. Her core pulsed with the same damn rhythm as her clit and ass. Half a second later, the belt hit again, and the blazing pain pushed back her orgasm. More swats came in rapid succession. She quickly lost count.

Again and again, Kellan swung the belt until the pain bled together into one throbbing ball of misery and unfulfilled need. She helplessly reached back and the belt connected with her palm, sending fire shooting up her arm.

She screamed and sank to her knees, keeping her butt up off her legs. “No more,” she begged, tears streaming down her face. God above, how she needed to come.