Kept for Training by Emily Tilton 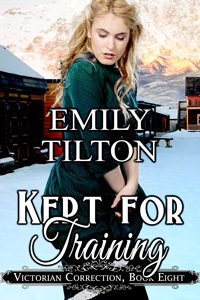 After her wagon train is attacked, eighteen-year-old Alice Rhodes flees for her life and manages to reach the town of Brownsville, Nebraska. But it doesn’t take long for Alice to discover that Brownsville is no ordinary frontier settlement, and on the very next day she is stripped bare, shamefully examined by the local doctor, and placed in a special school where she will be trained to surrender her virgin body completely to the man who will eventually claim her.

Though it leaves her blushing crimson when she is birched for any disobedience and made to please the men of the town in the most humiliating of ways, Alice finds herself drawn to Joe Smithers, the rugged, handsome pioneer at whose home she initially arrived. But before he can claim her, Joe will need to demonstrate publicly that he is prepared to well and truly master her.

“Mr. Smithers, would you bend her over, please, and raise her nightgown? A few spanks from your big right hand, on top of her welts from the birch, will teach her not to defy you, or me.”

Alice turned to Joe with wild eyes, the concrete idea of his hand on her bare bottom, awakening the pain of the birching so terribly, quickly making the fear at last get the better of the defiance. She held out her hands to him, beseeching.

“Please, no,” she begged. “I’ll… I’ll…” but she still couldn’t bring herself to say that she would do the thing she had seen Miss Fenton do to Mr. Sweeney. Mary Jones had kissed Joe’s penis, after she had washed it, and that didn’t seem so terrible. But to take the whole big thing in your mouth, and to let the man hold your head while he thrust inside the same way Joe had held Mary’s hips while he fucked her bottom… she couldn’t, even if the picture in her head of it seemed strangely to produce a different feeling. Even if it seemed to make her wonder whether she would feel the same pride Mary had felt about taking Joe in her bottom, should Alice be able to make the white seed come from Joe’s cock as Miss Fenton had with Mr. Sweeney’s, and swallow it all while Joe said good girl.

Alice had the fleeting impression, through her terror, that Miss Reynolds had some intent in her words to Joe that lay a little beyond Alice’s own understanding. The way Joe reacted seemed to confirm her in that idea, for he rose and seized her, and turned her around almost roughly, though without real violence. Alice gave a little cry as she felt herself in his power, felt him bending her, with her hands held behind atop her back, felt him raise the nightgown. She struggled, but entirely in vain. She kicked, but Joe gave her a very sharp spank upon her bare thigh, and then another, which hurt like blazes over the strokes of the birch Miss Reynolds had delivered in the same place, and said, “Stop that, Alice.”

“Spread her knees and inspect that pretty cunt and that sweet little anus while you have her there, Mr. Smithers,” she heard Miss Reynolds say. “Would you like her held down by two other pupils so you can discipline her properly, and fondle the bottom yourself?”

2018-02-25
Chris
Previous: Violated: A Dark Sci-Fi Romance by Aria Adams
Next: Mated to the Dragons by Sara Fields