He caught me trespassing. Then he took me as his. 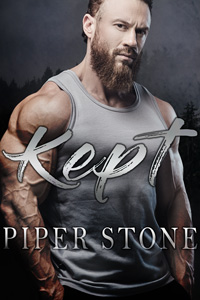 On the run from corrupt men determined to silence me, I sought refuge in his cabin. I ate his food, drank his whiskey, and slept in his bed. But then the big bad bear came home and I learned the hard way that sometimes Goldilocks ends up with her cute little bottom well-used and sore.

He stripped me, spanked me, and ravaged me in the most shameful way possible, but then this rugged brute did something no one else ever has before. He made it clear he plans to keep me…

He was all brawn and attitude as he smacked my bottom, moving from one cheek to the other. The pain was explosive, forcing my entire body to jiggle. I couldn’t get out of his grasp, his massive hands somehow able to hold me as if I was nothing.

“Stop. Stop!” I knew pleading wasn’t going to work, but I did it anyway. “I won’t curse. Okay?” Right. I had no idea why I was lying to myself, or to him for that matter. I’d been cursing since the first foster home, simply trying to get attention. I had gotten it.

I was shipped off to another family.

He lifted a single eyebrow. “Don’t make promises that you can’t keep, sunshine. Yeah, I like that name. Suits you.”

I gave him a harsh look, clamping my mouth shut as he continued the spanking. The utter embarrassment created a wave of butterflies in my stomach.

Allowing him to… eat me.

I slapped my hands over my face, as if I could actually hide from the man who was in full control. I wiggled and cursed silently, struggling with the raw emotions pouring through me. Not a single pretend parent had attempted to discipline me in any manner, other than locking me in my room. That is, if I even had a room. Often I shared little bits and pieces of lives, including a mattress on the floor.

Was that why this seemed oddly cathartic? As if I belonged here? The thought was insane, a byproduct of exhaustion and nothing more.

“You do realize that you’re going to follow rules while you’re here?” Hawk asked quietly.

“Does that mean you’re not going to toss me out to the wolves?”

Exhaling, the sound mixing with a slight growl, he rolled his eyes. “I will if you try anything like that again. You got it? And you’re going to learn respect if it freaking kills me.”

“Yes. I got it, bubba.” The single word no doubt added to my sentence, the spanking continuing in earnest. I lost count. I lost my mind. I lost everything I owned. And he was right. I’d lost my self-respect. All in a matter of days.

Yep. I was batting at zero.

“Do you know what’s coming now?” he asked, the same ferocious growl feathered all throughout the tone.

“What?” I managed, wincing from the heat still increasing on my bottom, the stinging sensations that had managed to carve a path into every nerve ending.

“I’m going to fuck you like you’ve never been fucked before, and remember, sweetheart, every hole belongs to me.”