Kidnapped and Claimed by Dinah McLeod 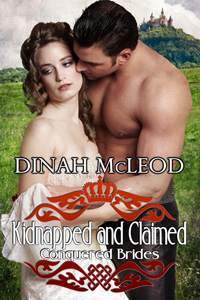 When her husband’s repeated infidelities and drunken insults become too much to bear, Lady Cecily flees from his estate, intending to seek refuge with her family in the castle where she grew up. But things quickly go from bad to worse, and she is kidnapped from the castle stables only moments after her arrival.

Unmoved by her abductor’s warnings of ruin about to befall her childhood home and his claim that he took her only to keep her safe, Cecily resists him every step of the way, until at last he spanks her long and hard. Yet in spite of her circumstances, as the days pass it becomes clear to Cecily that her captor cares for her in a way her husband never did. Could she really be falling in love with a brute who carried her off against her will?

Publisher’s Note: Kidnapped and Claimed contains spankings, sexual scenes, and more. If such material offends you, please don’t buy this book. This book is also available as part of a five-book collection entitled The Conquered Brides.

“Now, remind me why I am punishing you, Cecily.”

“Because… because I disobeyed you,” I whispered.

His hand came down hard on my quivering flesh, bouncing from one cheek to the next as he exacted justice for my sins. Each smack of his hand was firmer than the one before it and the desire to kick my legs and try to escape was nearly irrepressible. It was only his strong arm looped around my waist that kept me from trying.

Two hard, resounding swats on each of my cheeks had me gasping and arching my back. “Think hard, if you must.”

“I… I brought attention to myself.”

“It was a dangerous thing to do, was it not, sweeting?”

At that very moment, I began to wonder if I wouldn’t have been safer with the looters than with Antony. I very much doubted my bottom would be in such agony! However, I knew better than to say so aloud. “Y-yes,” I answered, tears beginning to roll down my cheeks.

“All I endeavor to do is to keep you safe, my lady.” With that, the spanking resumed, his hard hand coming down again and again until I thought I could bear it no longer.

“I intend to see to it that you keep that promise, Your Grace.”

I should have told him that no one would ever dare spank a duchess. That I had learned my lesson well, that it hurt too much. I should have told him something, anything to make it stop, but as I cried, words were lost to me, turned instead to piteous moans which only grew in frequency and volume as his hand continued to punish my hot, defenseless cheeks.