Kneeling Before Her Knight by Arabella Kingsley 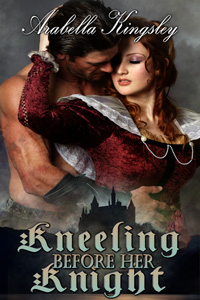 When her sister Rosalie is dragged from her home to be married against her will, Christabel turns in desperation to the only man who might be able to help. Unfortunately for her, that man is Sir Tristan, a knight who swears his questing days are behind him and refuses to aid her. When she questions his manhood, however, she quickly finds that he is more than ready to bare her bottom and spank her soundly.

Before she knows it, Christabel finds herself naked, bound, and serving at the pleasure of Sir Tristan. In spite of herself, she finds that some part of her is deeply aroused by her situation, but she cannot forget her sister’s plight. Will she convince her new master to act to save Rosalie before it is too late?

Christabel gave a squeal when the knight bent quickly and took her arm, pulling her neatly and helplessly over his shoulder. Struggling, Christabel was lifted atop the knight’s steed, and placed face downwards in front of his saddle, over the body of the beast. He moved the horse off. She squealed and kicked to free herself, but all was in vain as the dark knight moved the horse on. A surprised howl escaped her lips when she felt his heavy male hand strike her bottom with force.

“Silence, wench. Stop your caterwauling and remain still, or I will spank your bare bottom sore,” Sir Tristan instructed gruffly, raising his hand to give Christabel’s buttocks another firm slap for good measure. But that did not stop her from squealing and sobbing with fear.

With a heavy sigh of impatience, the knight stopped his horse and dismounted, wasting no time in pulling her from the horse to throw her over his broad shoulder once again. Moments later, he sat down on a fallen log, and Christabel found herself strewn across his leather clad knees. The knight rested his hand in the middle of her back to steady her and then lifted her dark red and white silk gown to her middle. Her bottom was as naked as the day she was born underneath her dress and bared to his sight immediately. She felt him rest a cool hand on her buttocks. With a gasp she fell silent and froze, suddenly realizing her fate—a sound bare bottom spanking.

She considered the masculine weight and firmness of his hand as it rested against her, allowing her to feel the knight’s strength and her vulnerability beneath it. Her punishment would be harsh, perhaps even brutal. He surprised her by caressing the skin of her bottom as it was warmed by the strong summer sun. Strangely, his firm touch, although preparing to chastise her flesh, felt reassuring.

“Hush, little one. You have a beautiful, plump rump for a beating. A spanking will settle your angry, fearful passions and make your temper more amenable to my tastes, wench. Then we will work out what further punishment it will be fitting for me to bestow upon you for your insults,” he told her in a deep, dark voice that seemed to caress her skin and melt her resistance, causing her to almost welcome him to beat her bottom sore. A curious, painful sensation between her thighs began to throb and produce a wetness she had never encountered. The feeling brought color to her cheeks and a needful pleasure in the pit of her stomach.

Her confused feelings collided with her fear, making her squirm and struggle to gain her freedom. But her actions were to cause the commencement of her chastisement without any further delay.

A rush of warm air pushed down and struck her buttocks before the knight’s firm dominant hand smacked her bare bottom with strength. Her body tightened, and she scrunched her eyes closed, breathing hard as she waited and anticipated the second blow to her vulnerable flesh. A loud sob from her lips startled her body into ceasing the movement that so annoyed the man. Her bottom burned and stung as the knight delivered another and yet another firm strike. Christabel’s buttocks quivered and shook as she howled and cried, yet the wetness grew and pooled between her thighs. The ache became pleasurable, threatening to burst from her body and consume her whole.