Her Knight’s Promise by Chula Stone 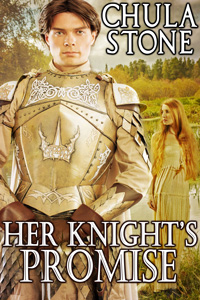 Alyna has always done her best to earn the respect of Sir Walter, the soldier who all but raised her, and her skill in battle stands as proof of her dedication. But when she comes of age and he seeks to marry her to his trusted friend Sir Jurian, she resists his efforts. As a compromise, Jurian asks Alyna to give him a week to win her love, and she grudgingly agrees.

Jurian proves his worth soon enough, riding swiftly to her aid when she is captured by outlaws during a trip to a nearby town. Much to Alyna’s chagrin, however, when her suitor discovers that she has disobeyed him and placed herself in danger once again mere hours after her rescue, he puts her over his knee and spanks her soundly. Yet despite her sore bottom, when the battle-hardened knight takes her in his arms and kisses her, Alyna finds herself longing to be his.

But as Alyna quickly learns, being a wife has its difficulties—cooking and running a household, among others—and her new husband insists on her obedience, correcting her with a firm hand applied to her bare bottom when he feels it necessary. Though Jurian shows his love for her in many ways, Alyna chafes at the loss of her independence. Will her husband keep his word and give her the freedom he promised when he courted her? Can she remain the untamed woman she has always been, even as she strives to find her place as his loyal wife?

Publisher’s Note: Her Knight’s Promise contains spankings of an adult woman, including domestic discipline in a historical setting. If such material offends you, please don’t buy this book.

His long strides caught him up with her before she was able to drag the large door open. “We both know your pretty little backside is going to pay the price for your folly today. The only question left in your mind should be how long I shall take to tan your hide and whether or not I shall use my belt to tan it.” So saying, he took her by the elbow and dragged her back into the room. The candles flickered in their holders, casting strange shadows on the wood paneled walls as he plunked himself down on the low footstool near the brazier and pulled her over his lap.

His legs were long, so his knees were bent at an angle that kept her sliding close to his body as she struggled to get away.

“My lord, please! The guard duty! That’s the normal—ow!”

“I didn’t want to do this. Really, I did not! But you left me no choice.” He brought his palm down again and again on her upturned backside. “I cannot allow you to do as you please, disobeying me and thwarting my plans. It would be wrong.”

“Ow! But this isn’t the way!” She sucked her breath in hard between her teeth and he could tell she was struggling not to screech in her pain. “Extra chores. Hard ones. Terrible ones no one wants. That’s what Sir Walter doles out for punishment.”

“Then this should be easier on you,” Jurian commented, pushing her dress up out of the way and tucking it into the belt at her waist. The thin cotton shift she wore under her dress hid little from his gaze. The way she scissored her legs in her struggle to free herself presented a much too tantalizing picture, so he forced himself to raise his gaze higher. “I do understand that you’ve been through a terrible ordeal today. One little spanking and then it’ll all be over with. You should be grateful.” He redoubled his efforts, covering her nether cheeks with hot stinging swats. “What worries you? Could it be that you are embarrassed, lying over my lap, paying for your naughtiness?”

“Yes, I’m embarrassed! No one has ever dared do anything like this to me! Never!” She gave a mighty heave as if trying to throw herself off his lap.

Clamping his arm down tighter on her waist, he ignored her wordless cry of frustration and gritted his teeth to answer, “But I dare, and I’ll dare again. There are many things I’ll dare to do to you, little one. You’ve showed me today what you’re capable of. Now, I’m returning the favor. If this is what it takes to remind you who gives the orders and who obeys them, then so be it.” Not pausing in his spanking, he shifted her forward so her bottom was even more accessible.

This seemed to touch a chord with her. Her struggles stilled, though her body was still as tense as a bow string. He heard her let a long breath hiss out before she replied, “I know it is my duty to obey.” Here she let out a soft but plaintive wail as he gave the roundest part of her bottom several hearty swats. “I did wrong today and I’m most heartily sorry for it!”

“I imagine you are. Now, all that’s left is to ensure that you remember this lesson every time you sit or walk tomorrow.” He concentrated on her upper thighs next, a trick he had learned from his father’s descriptions of the most effective methods for dealing with wayward wives. He had hoped he would not have to administer such punishment before he had won his wife’s love, but with Alyna it seemed, nothing would go according to plan.

“I will remember, my lord.”

“Good. It should smart and sting and burn. I can tell even through your shift, you’re getting red as a sunset. All part of the plan.” He continued spanking even after she tired herself out and lay calmly over his lap, accepting what he was doing with no more struggle. Considering all she had been through that day, he decided against using his belt this time.

“There. That should do it,” he pronounced a few minutes later. He helped her up then turned her and sat her down on his lap, making her squeal and jump. “Stay here now. It’s part of the process. You must show me that you’ve learned to do as I say. Right now I say let me hold you close. When you were missing today, I was so worried. You ran off by yourself, Alyna. In the past, that might have been fine, but no longer. The Musarts are up to no good. We must be doubly on our guard.” All the while, as he talked, he stroked her hair and her back, breathing in the scent of her, enjoying her nearness. “I want to win your heart, but I can’t let you run wild and think you’ll have no one to watch over you. I want you for my own, little one, and I promise you, I shall always protect what is mine.”

2015-02-13
+admin
Previous: Taken by the Tycoon by Normandie Alleman
Next: Taming the Little Princess by Rose St. Andrews