Lacey and the Sheriff by Chula Stone 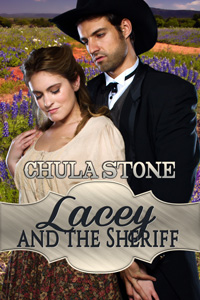 Twenty-year-old Lacey Alton knows she’s behaving scandalously when she catches a stagecoach to another town to meet Hal Earhart, her potential husband, but what’s a girl to do when she has three bossy brothers always in the way of her plans? Upon meeting Hal, Lacey quickly concludes he’s a good man, but not the man for her. She’s more than ready to play matchmaker, though, and she’s pretty sure she has a friend who would be just perfect for Hal.

Unfortunately for Lacey, there is another man who is not so easy to push aside. Sherriff Zach Eagan has no patience for sassy, headstrong young women who get up to mischief in his town, and Lacey soon learns that defying the handsome sheriff will earn her a long, hard paddling. In spite of her sore bottom, Lacey decides she likes the sheriff. But if he wants her he’ll need to chase and court her properly… and probably take her over his knee more than once.

Publisher’s Note: Lacey and the Sheriff contains spankings of an adult woman, including domestic discipline in a historical setting. If such material offends you, please don’t buy this book.

She thought she knew what he wanted. In the hotel, they wouldn’t be able to find any privacy. He wanted to repeat one of those burning delicious kisses he had given her the night of the dance. The memory made her flush hot. Did he think to steal another one? Was he having second thoughts about sending her away? She followed him willingly into the jailhouse.

“So it is. Well, anyway, now we’re here…” He let the words fall away and pulled her to him. To him? Not exactly. With him was more like it. He went over to the chair behind the desk and pulled it out. Plunking himself down, he pulled her over his knee. “I’ve been wanting to do this for quite a while now.”

So much for her hopes of a repeat of his pleasant attentions at the dance. She knew that what he intended to do was about as far from a kiss as you could get. Her mind couldn’t keep up with the pace of the changes, so her resistance proved to be too little, too late. By the time she tried to pull her hand out of his grasp, he already had her half way over his lap. Her squawks and squeals of protest were drowned out by the snapping sound of his large palm smacking down on her tender flesh. The barrage of spanks he applied to her seat should have lit up the night like fireworks, if there were any justice in the world, for so it felt to her smarting backside. “Ow! How dare you!” she screeched.

“Oh, please. You can do better than that,” he commented dryly. Never pausing as he peppered her posterior with swats, he scolded on. “I’ve been patient. I’ve been lenient. I’ve been more than understanding.”

When she tried to twist away he just used her own motion to push her skirts out of the way and spank her over fewer and fewer layers until there was only her thin combination undergarment to protect her modesty.

“I told myself to cut you some slack. She’s behaving better than Tess, I told myself. At least she hasn’t run away, I reminded myself. And then you went and did it.”

Sincerely regretting she ever fell in with his harebrained scheme in the first place, she tried to hit at his legs to get his attention, but that was no use either. He merely trapped one of her arms by her side and caught the other one under his arm that was busy clamping her waist to his lap. No longer able to fight back, she bucked helplessly until she was exhausted.

All the while he kept up his tirade. “It was the last straw, you know. The one that broke the camel’s back? Well, here’s my straw and it won’t break your back, but it will sting your backside.” Suddenly she felt a change as he leaned forward then came back into position. The next swat hurt ten times worse and in a totally different way.

She wasn’t sure, but she could imagine. It felt like a thin slat of some kind of wood. A ruler perhaps? What else could it be? It stung like fire and the pain seemed to linger even when he had moved on to another spot. The helplessness gave way to fury at her own inability to hamper anything he wanted to do. He was in complete control. Nothing she said or did made the slightest difference. He was counting the swats aloud and had reached thirty before she began to cry. By forty, she was lying still and yielding over his lap. His words sunk in as she realized that in between the swats and the counting, he was still telling her how much he cared about her.

2014-11-21
+admin
Previous: Learning to Be Little Again by Meredith O’Reilly
Next: The Queen and the Archer by Jane Fairweather