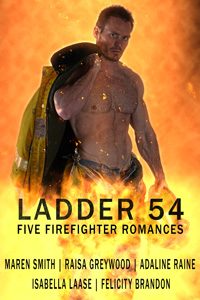 The Dance Card by Maren Smith

Light Me Up by Raisa Greywood

When Dr. Selene Alexiou travels to Big Banks, Montana for work, she hopes she can avoid Theo Papadakis, the schoolgirl crush who broke her heart. But when she hears about a charity date auction in which Theo—now a fireman—is participating, Selene decides to teach him a lesson. After placing the winning bid, however, her plan quickly goes awry. Infuriated by his scolding, she leaves town, but when he tracks her down will his skilled dominance prove irresistible?

Dakota Channing returned to the sleepy little town of Big Banks hoping to gather the courage to explain to her ex-husband why she ran away. What she ends up doing, however, is bidding on a date with him at a charity auction. When she wins, she soon finds herself over his knee for the spanking he should have given her years ago, and as she lies naked and bound with her well-punished bottom sore both inside and out, he leaves her in no doubt that she still belongs to him.

Sparked by Deception by Isabella Laase

When twenty-two-year-old Claire lets her twin sister Claudia talk her into pooling their money to bid on a date with firefighter Declan Kennedy at a kinky charity auction, the covert plan is for them to take turns over his well-muscled thighs. After Declan strips her, spanks her, and claims her hard and thoroughly, however, she cannot bear the thought of sharing him with anyone, especially Claudia. But will Claire’s jealousy end up alerting Declan to their little scheme?

A Hero for Lauren by Felicity Brandon

More than ten years ago, Lauren Roberts was rescued by firefighter Blake Anderson, and she’s fantasized about him ever since. She jumps at the opportunity to bid on him at a charity auction, but she ends up winning more than she bargained for, and soon she is over his knee having her bare bottom spanked for disobeying his instructions. There’s no doubt his stern dominance arouses Lauren, but when Blake discovers she’s in real trouble, can he still be her hero?

Publisher’s Note: The books of Ladder 54 include spankings and sexual scenes. If such material offends you, please don’t buy this collection.

“Well then, unless you think you can magically learn to live with this,” he pointed to his lap, “over my knee.”

Rylee looked at the paddle. The bright red business end was a hand’s-width wide and long enough to cover the summits of both her nether cheeks at once. She’d never felt it before, but she’d seen its handiwork often enough to know it stung like the devil. More submissives called red after a few smacks with this than any other implement, except perhaps the whip. Even with a warmup, most scenes with this ended in tears.

Could she live with it? Of course she could. She’d been living with it for a week now, and every day of it had been a guilt-ridden nightmare. She’d be lying if she said she wasn’t scared by the scenario Walker had just outlined. The thought of having to hold ipecac in her mouth for a full minute made her stomach roll, although it did feel deserved. Disgusting, but deserved. And so was the spanking, even if she couldn’t end it whenever she wanted. That felt deserved too.

Shifting onto her knees, Rylee lay her hands upon his thigh, lightly, just long enough to steady her courage and get a feel for the choice she was about to make. Crawling up into his lap, she put herself into position.

“Give me your hand,” Walker said.

He’d told her he was going to pin her legs and hold her hands, but to actually hear the command brought a crash of reality down upon her. That he wasn’t going to give her the option of trying to control herself through this, meant he didn’t think there was a point in making her try. Maybe because he knew she wouldn’t be able to, which reinforced just how determined he was to make sure this was hard to take.

Because forgiveness for some things shouldn’t come easy, Rylee thought. She offered back her right hand, blinking rapidly against a haze of premature tears when he lay his arm across the small of her back. He captured her legs too, and she swallowed hard when she felt him pick up the paddle behind her.

“Repeat after me,” Walker said, as the smooth cool wood came to rest lightly upon her bare ass. “I did a very bad thing and I’m very sorry. Before each swat, I want you to say that. Do you understand?”

There was no blinking back this new rush of tears. “Yes.”

She’d already cried so much today, she should have been all cried out, but that penitent phrase proved her wrong. Her bottom lip trembled; she bit to stop it, but the tears slipped free anyway, blurring the coverlet as she whispered, “I did a very bad thing and I am very sorry.”

She meant it too, just like Walker meant it when he’d promised not to make this easy for her to take and that she wouldn’t enjoy it. He’d been right to take her hands and pin her legs, too, because by the third stroke Rylee couldn’t hold still. By the fifth, she was crying too hard to repeat her penitent phrase with any level of coherency, but that didn’t mean she regretted her actions any less. The pain consumed her. It broke her down, turning her into a being incapable of speaking, or thinking, or anything except reaction. Reaction against the next crack of the paddle. Reaction against the desperation and self-preservation begging her to break free, while the very last shred of her guilt clung on just long enough to make sure she knew she was getting exactly what she deserved. Until eventually even that failed, and all Rylee could do was beg Walker to stop, shriek for it, bawl for it. She fought his restraining limbs until all her strength was expended and she had nothing left, only tears. Only this overwhelming sense of sorry and the fiery pain that mounted crack after fiery crack across a bottom already so hot, so throbbing and so sore, that she couldn’t ever imagine being able to sit again.

Except that Walker made her, because eventually the spanking ended. Laying the paddle aside, he dragged her up and forced her down again, this time to sit upon the lap he’d just spanked her over. With her head upon his bare shoulder, he held her until she had no tears left.