The Lady and the Sheriff by Carole Archer 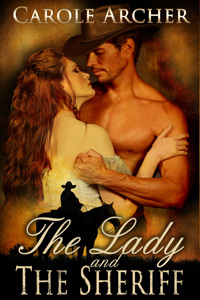 Nineteen-year-old Emma Bell has always wanted to travel the world before settling down, and as a result she has spurned every suitor her father has presented. He is desperate to find a suitable match for his beloved daughter—one who will treat her well, but who is well-off enough to afford the upkeep of the family estate in the English countryside.

In exasperation, he decides to take her with him on a trip to America in hopes of satisfying her desire to travel and finding her a good husband at the same time. All seems to be going perfectly after they meet Percival Woodhampton and the rich young American becomes interested in Emma.

Unfortunately, Emma’s father passes away before her wedding, and Percival soon shows himself to be anything but a gentleman. After a desperate escape from his home, she sets out on a train to see the American West as she has dreamed of doing for years. After her train is robbed by outlaws, however, Emma eventually finds her way into the care of the firm handed Bob Booker, the sheriff of Great Bend, Kansas.

Although neither of them expects it initially, their relationship grows with time until the sheriff is much more than just a strict guardian for Emma. Will they both admit their feelings for one another in time, or will Bob’s firm hand and Emma’s willful nature split them apart.

Publisher’s Note: The Lady and The Sheriff contains non-consensual spankings of an adult woman, including domestic discipline in a historical setting. If such material offends you, please don’t buy this book.

Bill chuckled. “You’re putting on a really good show for all of my men, and I’m enjoying it very much too.”

Emma glanced about and was horrified to see the rest of his gang standing by, watching her kicking and squirming across Bill’s lap, her skirts raised and her bloomers on display.

“No,” she yelled, “I’ll kill you. I swear to God I’ll shoot you with your own gun if you don’t release me this instant.”

Bill’s hand landed hard over and over again on Emma’s bloomers and she howled in pain. She kicked and squirmed as his hand continued to rapidly heat her bottom. Emma shouted and cursed and made threats as Bill spanked her bottom firmly. Bill stopped and patted her bottom gently, before yanking her bloomers down and exposing her bare bottom to the cool night air.

Emma froze in shock and before she had chance to voice her protests, Bill started to deliver a stinging spanking to Emma’s exposed buttocks. Emma howled in pain. She had never been so humiliated in her whole life, and she begged Bill to stop as she kicked her legs and squirmed desperately to free herself from his grasp. Emma’s bottom was burning unbearably yet still Bill’s hard hand continued to fall in a steady rhythm. He showed no signs of stopping and Emma’s shouts and cries of pain quickly turned into pitiful sobs.

“Are you going to be a good girl?” asked Bill, as his hand continued to smack her stinging bottom. “Yes,” wailed Emma as she squirmed across his lap. “No more, please, I’ll be good,” she sobbed.

Bill’s hand cracked hard against Emma’s bottom a few more times as she sobbed and shook. He finally stopped and lifted her to her feet, pulled her bloomers up and led her across to his bed. As they passed his grinning men, Emma looked to the ground, her cheeks red with embarrassment. She suddenly realized that with all of her kicking and squirming during the spanking, they had almost certainly seen quite a bit more than just her naked bottom, and she blushed even more deeply.

“You can’t be trusted to sleep alone so I’m going to give you a choice. I can tie you up and put you in your own bed, or you can sleep in here with me. What’s it to be?” he asked.

Emma struggled to pull away from the hand holding her wrist. Bill pulled her towards him and wrapped his arms around her. “I’m not going to hurt you, sweetheart. I won’t take advantage of you, I promise. I just want to ensure you don’t try to escape again.”

Emma nodded and whispered “I’ll share your bed.” She brushed away tears from her cheeks, and blushed as Bill climbed into his bed and pulled Emma down beside him. Her scorched bottom was pressed uncomfortably against Bill’s body as he pulled her against him. Although Emma was utterly embarrassed that Bill had bared her bottom and spanked her, she felt strangely cared for as he held her comfortingly.