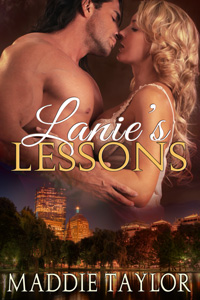 Attorney Lanie Fischer is a force to be reckoned with in the courtroom, but the stress of her caseload has been mounting relentlessly. She puts on a brave face at work, but behind closed doors Lanie has become an emotional wreck, and her husband, law professor Ethan Fischer, is tired of watching her self-destruct. She’s not sleeping, she’s lost weight, and their sex life is starting to suffer. Something has to give, and as far as he is concerned it is time for a radical new approach. From now on, Ethan decides, his wife will be spending quite a bit of quality time over his knee with her bottom bare, learning some lessons she has needed for a long time.

Unable to believe he actually meant to spank her, she froze in place, the air trapped in her lungs as she lay bare assed and vulnerable over his thighs. Once or twice, in the heat of the moment, he’d given her a swat or two, but this was different. For one, it was real, and two; it stung really badly. His hand returned and instead of another swat, he gently rubbed where he’d spanked. The sting from his hard palm quickly subsided, changing to a tingling warmth that spread across her skin. After a moment, his hand extended its caress, his fingertips trailing over her curves in widening circles, brushing close to her center, smoothing down her thighs, his nails scratching her lightly in sensitive spots. When he at last touched her pussy, a shiver rushed through her body and she relaxed into the intoxicating blend of sensations.

“You’re drenched,” he commented, stating the obvious. Lanie had been wet since he’d called her ‘good girl.’ Those simple words had sent a blast of heat and moisture to her pussy. Then he’d ordered her over his lap and the rush of arousal inundating her system had robbed her of the ability to think. It left her mindlessly obeying her libido, the center of which lay between her already damp thighs, making her willing to do almost anything he asked. Ethan never failed to turn her on. It was always this way, even after all the years they’d been together. But tonight, it had increased exponentially.

Two swats followed his words, one on each cheek, both as stinging as the first. The rubbing came again soon after. She wiggled and squirmed as he maintained a firm hold on her waist. When his fingers slipped between her thighs, gliding along her wet folds and finding her clit, she froze for a moment before wantonly spreading her thighs in a wordless plea for more. She couldn’t remain silent as pure, unadulterated lust swamped her senses and unbidden, a moan escaped her lips.

“That’s my girl. You want me to take control, don’t you?”

Mindless with arousal so intense she couldn’t speak, she only managed to produce a whimper in answer. He lingered another minute, plunging into her dripping channel and fucking her slowly with two fingers.

“You’re absolutely beautiful, Lanie, and I can think of nothing I want more than to drive into this drenched pussy.” He emphasized his words by gliding in deeper. “I plan to do just that, but we need to finish what we’ve started here. I’m giving you a dozen spanks this first time, for the sass and the cursing.”

Biting back a groan, she canted her hips and spread wider for him. It was too much, obliterating her tenuous control as the rising pressure threatened to burst free.

As soon as the words left her mouth, he pulled his fingers free.

“No,” she cried, “please, don’t stop. I’m so close.” Her breath came out in little pants and her skin beaded with perspiration. “Please,” she begged.

“Not yet, Lanie. You’re being punished. You can come after your spanking, when I’m deep inside you, not before.”