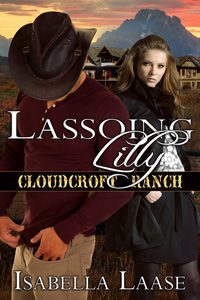 Sophisticated, confident businesswoman Lillian Adams spends her days managing a sizable staff, but her lonely evenings are spent imagining deliciously naughty stories about firm-handed men and the feisty women who love them. But when an emotional confrontation at work leaves Lilly at a crossroads in her life, she decides it is time to take the leap and see if she can truly make a career for herself as a romance novelist.

Soon enough, Lilly finds herself naked, blushing, and burning with need as Linc teaches her what it means to surrender her beautiful body to his masterful lovemaking. But though it excites her deeply when Linc spanks her bare bottom for any disobedience, Lilly struggles to come to terms with her intense arousal at being made to submit. Can she find a way to balance what is expected of an independent, modern woman with her desire to be taken in hand?

Her blush returned, and she quickly sat up. “Wait… I… what am I supposed to wear?”

“Nothing. That’s the point. You’re here to entertain me, and I like you this way. Don’t worry. Everybody out there has seen naked women wandering the building.”

A deep blush offered an enticing window to her mortification, but she simultaneously slipped her hand between her legs to declare the bigger battle. He spoke with a grin. “I’m the only one who’s going to provide any release. Move that hand, and don’t make me spank you.”

When her new reality was firmly established, she returned her eyes to the floor with a shudder. He recognized his small victory and moved to the closet to find the brilliantly colored silk ropes that would provide the necessary reminders for his lesson.

Before he could turn around, however, she’d left the couch and slipped her arms around his back. Her hand tickled his arousal, and he had a second fight to stop his groan. “This won’t do at all, Lilly. Let’s start over.”

Facing her, he dangled the ropes to demonstrate the seriousness of his intent, and she took her panty-clad body a step backward. Her mouth hung open slightly, and he tapped her chin with a gentle touch. “First…” he said in a soft, dangerous voice. “Did I tell you that you could get off the couch?”

Lilly looked to the ropes and back to the couch, but he caught her around the waist before she could bolt. “Too late for that, little girl. Let’s try something new.”

Still holding on to her soft, toned body, he moved to the leather chair and bent her in the middle to direct her over his knee. Unable to submit like a good girl, she put up a small fight with her kicking and squirming. She shrieked with a touch of panic. “No, Linc. I… I’ll listen. I don’t need you to spa—”

“Now is not the time to be naughty, Lillian. You need to mind what I say.”

Neatly tucking her into his spare arm, a first correction was firmly applied to her black lacy panties. She squealed, “Ouch… that hurt.”

He stopped to rub the effect into her bottom. “It was supposed to hurt, Lilly. I’m here to remind you to be obedient.”

2017-11-04
Chris
Previous: In Need of Correction by Gracie Malling
Next: The Dragon Lord’s Pet by Loki Renard