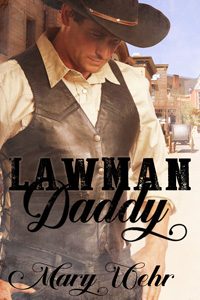 As far as eighteen-year-old orphan Riley Prescott is concerned, she is a grown woman who can look out for herself, and she is furious to discover that her late father’s will stipulates that she remain in the care of a guardian until she marries or reaches the age of twenty-one. To make matters worse, her guardian turns out to be Jim Wade, the new marshal of the town of Harmony, Texas, and the stern, infuriatingly sexy lawman is dead set on taking her very firmly in hand.

It doesn’t take Jim long to realize that his sassy, disobedient ward is in desperate need of strict correction, and when Riley puts his warnings to the test he does not hesitate to bare her bottom and spank her soundly. But even with her cheeks blushing and her backside on fire, Riley cannot help wondering what it would be like to belong to Jim, and soon she is calling him daddy.

Though he worries he is taking advantage of his authority over her, Jim cannot stand the thought of another man courting Riley, and before long he decides to make her his wife and claim her properly. Surrendering her beautiful, virgin body to her new husband’s masterful lovemaking proves more pleasurable than Riley ever dreamed, but when she is kidnapped by a local ruffian seeking vengeance against Jim, can she count on her lawman daddy to rescue his little girl?

“I’ve never been spanked before.”

“Any one with half a mind can see that.” His eyes narrowed. “Don’t keep me waiting, little girl.”

Her belly flip-flopped as she slowly crossed the room. Right now she felt much like a little girl about to be punished by her stern daddy. Despite the outward show of bravado, tears stung her eyes.

Warily, she placed her left hand on his right thigh and gripped his shoulder with the other. Thick corded muscles tensed beneath her touch, reminding her that he was a strong powerful man. Once she lay face down over his lap there would be no turning back. Swallowing hard, she raised her eyes and saw him watching her intently.

“Will it hurt much?”

“I won’t lie to you, Riley. I intend to blister your bottom so you think twice before defying me again.”

“You won’t reconsider?” There was always the chance he could change his mind.

His expression remained adamant. “I wouldn’t be worth a damn as a guardian or a man if I didn’t carry out a punishment after promising to do so.”

Defeated, Riley bent forward and, with his help, settled across his lap. He draped one arm across her shoulders to keep her in place. Riley forced herself to remain still, but when a cool breeze brushed along her lower back she began to thrash about.

With her dress over her head, her voice came out muffled. “What do you think you’re doing?”

“Getting rid of this padding. You won’t feel a thing if I spank you over your clothing.”

“But that’s inappropriate. Help,” she screeched at the top of her lungs and kicked out her feet.

Jim threw one leg over her two. “Settle down, you little brat.”

One hand slipped beneath her belly and pulled open the ribbon to her drawers. Within seconds her ass was bare.

Riley stiffened with rage. “You have no right.”

“I have every right, Riley Prescott, to punish you as I see fit. A few whacks on a covered behind would not accomplish a damn thing. It’s my responsibility to see that you are properly punished and that means a spanking on the bare.”

Oh, the horror of it all. No one had ever seen her naked bottom since she was a baby. It was mortifying that Jim could also see her most intimate parts.

With renewed determination, Riley fought like a wildcat. She may not be able to move her legs but there was nothing preventing her from pummeling his legs with her fists.

“Jesus H. Christ.” Jim caught both her wrists in one hand and pinned them to her back. “Don’t make me throw cuffs on you.”

“You uncivilized bastard,” she snarled between her teeth.

A loud crack reverberated in her ears quickly followed by a line of fire that streaked across one cheek. Another landed on her other cheek with the same amount of impact.

Riley howled and wagged her ass first one way than another to avoid the onslaught of smacks he rained down on her tender skin, but Jim didn’t miss his target.

Suddenly he stopped and she expelled a whoosh of air.

“Don’t get comfortable yet. I’m just admiring my handiwork. My, my, your skin is turning a nice shade of dark pink. It’s very becoming but I’m partial to cherry red.”

2018-08-04
Chris
Previous: Captive: A Dark Cyborg Romance by Loki Renard
Next: Taken by the Warriors: A Dark Sci-Fi Romance by Marlee Wray