The Lawman’s Lady by Kallista Dane 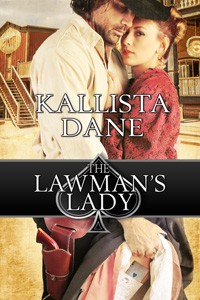 Beautiful, quick-witted Liza Danvers has made a career out of cheating at poker and fleecing hapless cowboys, but her luck runs out when her antics incite a brawl in the western town of Canyon Diablo. Sheriff Hugh Blackthorne is not a man to be trifled with, and the bounty hunter turned lawman knows exactly how to deal with a sassy lady causing trouble in his town.

Liza does her best to charm her way out of the situation, but Hugh isn’t buying it, and before she knows it she has been stripped naked for a thorough, humiliating search. When she is caught red-handed with stolen property, she quickly finds herself over the handsome lawman’s lap for a bare-bottom spanking she will not soon forget. The sheriff’s firm chastisement leaves her with blushing cheeks, a burning hot bottom, and an irresistible need for him to take her long and hard.

Having gone to sleep with Liza in his arms after the most intensely passionate lovemaking he can remember, the last thing Hugh expects upon waking up the next morning is to discover that his captured miscreant has run off, robbing him on the way out for good measure. More determined than ever to tame the little wildcat, he tracks her down and gives her the strapping of her life. Once back in Canyon Diablo, he places her under house arrest… at his house. She will learn to obey him, or she will spend the next month with her bottom sore both inside and out.

The sheriff’s willingness to take her in hand infuriates Liza, but what truly drives her crazy is the helpless arousal that follows even the most shameful of his punishments, and despite the circumstances her desire to belong to him completely grows with each passing day. But can she trust a man like him when he professes his love for her, and can they truly put aside the scars of the past to build a future together?

He pulled her arms out from under her, stretching them forward in front of her head, and snapped the handcuffs on her wrists. She started to cry. Blackthorne reminded himself it was another one of her tricks.

“You’re getting punished, Lizzie. You might as well resign yourself to the fact. I’m going to paddle your ass. But first, I have something special in store for you. And I don’t want you to be able to use your hands until your punishment is over.”

She turned her head to glare at him. He got out his pocket knife and began peeling the ginger, whittling until he had a piece as long and thick around as his middle finger, rounding it at one end.

“Have you ever had one of these up your ass?”

Her eyes widened in horror. “What is that?”

“It’s called ginger root. I’m told it burns and stings like the dickens, especially if you clench your bottom tight around it. Your hands are cuffed in front of you, so you can’t get it back out by yourself. I suggest you lie there quietly and take your punishment like a good girl, because if you try to resist, it will only make things worse.”

He stood on the side of the bed and pulled her backwards until she was bent over the edge. Then he stuffed the pillow and blanket under her stomach, lifting her so that her feet dangled just above the floor.

She snarled at him and he whacked her soundly with the paddle. She let out a howl. He gave her another smack.

“I said spread your legs. You might as well do as you’re told, because I’m just going to keep paddling you until you do. Then we’ll start your punishment.”

Fighting back tears of anger and pain, Liza reluctantly opened her legs an inch.

He gave her another hard whack. “More.”

She whimpered but spread her legs father apart. Blackthorne looked down at her tight rear entry and the lips of her pussy, damp with dew. His cock stiffened and he cursed inwardly as he realized this punishment was going to be as hard on him as it was on her.

Spreading her further apart, he pressed the rounded tip of the ginger against her bottom hole. She gasped. He increased the pressure, sliding it past the tight entrance. She began wiggling around on the bed.

Suddenly her voice changed from a whine to a shriek. “Oh, Lord! It burns! Take it out. I’m on fire!”

He pushed harder, lodging the ginger deep inside her. “Relax. If you try to squeeze it out, it will only sting more. Now lie there and don’t move. You’re getting thirty whacks with this paddle.”

2016-01-09
+admin
Previous: The Officer’s Little Rebel by Ava Sinclair
Next: His Captive Mate by Samantha Madisen