Leashed by the Dragons by Loki Renard 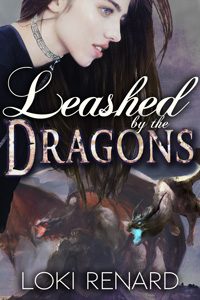 Nineteen-year-old orphan Brianna Packard learned quite a bit about getting out of tough situations over many years spent fending for herself, but nothing could have prepared her for the moment she is grabbed off the street by two powerful dragon shifters intent on bringing her back to their world, training her as a pet, and then selling her to the highest bidder.

Though Valkimer and Chak expected that taming a human female would be a simple task, Brianna turns out to be as clever as she is beautiful, and when she escapes it is no small feat to recapture her. Determined to master their feisty little captive, they waste no time in stripping her bare and spanking her soundly, but that is only the beginning of her punishment.

When she continues to defy her new owners, Brianna soon finds herself bound and on display, with her bottom on fire both inside and out and her naked body teased until she is quivering with helpless, desperate desire. By the time her captors are convinced she has learned her lesson, she is all but begging them to take her in any way they please, and when the two handsome warriors claim her at last the pleasure is more intense than she would have thought possible.

It isn’t long before Brianna is blushing crimson as she is fitted with a collar and tail, and as her training begins in earnest over the coming days she begins to realize how thoroughly her masters plan to enjoy their new pet. More shameful still, though she promises herself that she’ll continue looking for an opportunity to escape, part of her isn’t even sure she wants to…

Publisher’s Note: Leashed by the Dragons is a stand-alone book which is the fourth entry in the Dragon Brides series. It includes spankings and sexual scenes. If such material offends you, please don’t buy this book.

“You’re not going to make me wear a tail?”

“Oh, we absolutely are,” Chak replied. He stood in front of her, looking down at her with those stern dark eyes as Valkimer walked around behind her, where her bottom was raised high and where she could not see him.

She felt him though, his large hands spreading her cheeks to examine her tight little hole. She could feel her anus squeezing and squirming in front of him for long moments where it felt like all he was doing was looking at that tender, vulnerable little place that used to remain unexamined by all eyes.

A second later, his fingers pressed against that same little bud with a dollop of the dragon lubricant, which was much thicker and more viscous than her own natural juices ever could have been. He was preparing her for the tail, a fact that made her face blush furiously.

“At least it’s not a root,” she moaned, more to herself than anyone else.

“You’ll be begging for the Cadentis root,” Valkimer promised her as he thrust his finger into her bottom and swirled thick, greasy lubricant around her tight little hole.

“Oh, god!” The sudden intrusion didn’t hurt. They had played with her bottom too much for her to still make the mistake of tensing and resisting when the dragon’s fingers came close, but it was still a shock to be handled with so little reluctance. From the beginning, Valkimer’s total control of her body had been incredible.

And now Chak was pulling the fly of his pants open where the bulge of his dragon cock was starting to make itself obvious. She could smell him, the thick musk of the male that made her blood run hot. It was his semen, little beads of it gathering on the head of his cock as his arousal stoked hers chemically.

It was almost a relief when Valkimer’s fingers slid from her ass and she felt the tip of the plug being pressed to her hole, smooth and cool and very, very hard. There was a slight flexibility to it, but her bottom had to give way to the plug as the tip of it slipped past the ring of muscle protecting her rear and sank in deeper, growing wider and wider until her fingers curled against the wood of the legs of the horse over which she was bent.

The sound that emitted from her lips was more like a groan than a moan. It was an effort to take this punishment. The plug was large and unyielding, just like the man who wielded it, and though he had prepared her for it first, there was still discomfort, both physical and emotional in actually being stretched around it.

“No! Okay! I promise I won’t be… oooooo, god…” Her gasped promise to be good fled. Valkimer reached underneath her body and pinched her clit at the same time as Chak cut off the rest of her complaints by taking her head and sliding his thick, hard cock right between her lips and into her mouth after the fashion of a gag.

2017-10-08
Chris
Previous: Under His Control by Stella Blanche
Next: His Captured Mate by Samantha Madisen