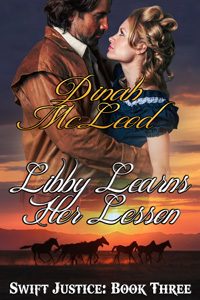 As the only child of the well-to-do mercantile owner in her small western town, twenty-three-year-old Libby Park has been indulged all her life, but the one thing her parents cannot seem to provide for her is a suitable husband. Libby is unimpressed by the tedious, self-important men from back East preferred by her parents, and it turns out to be handsome local rancher Wesley Swift who sets her heart racing for the first time.

Wesley quickly makes it clear that he will have no patience for Libby’s sharp tongue, however, and after he witnesses her treating one of her father’s employees poorly he takes the spoiled girl over his knee for the first spanking of her life. Wesley’s firm discipline only increases Libby’s desire for him, but is she truly ready give up her pampered existence to become a rancher’s wife?

Publisher’s Note: Libby Learns Her Lesson is the third book in the Swift Justice series, which also includes Swept Off Her Feet and Maggie Meets Her Match. It contains spankings and sexual scenes. If such material offends you, please don’t buy this book.

“I want you to know that I don’t punish you for anything other than your own good. It gives me little pleasure to tan your hide, but there are times it has to be done.”

“Yes, Sir.” Somehow, hearing him say that made it a little easier to endure.

Or it did, when he wasn’t actually spanking her. Because the moment his large, hard hand came smacking down on the back of her drawers, the tears that had dried moments before quickly renewed in her eyes. She’d thought his hand hurt the last time she’d felt it, but she hadn’t ever been spanked over a switched bottom before! It was agony! Painful, stinging, burning misery!

Libby sobbed quietly over his lap as the air resounded with the sounds of his palm cracking across her bottom again and again. Her bottom stung to the point where she wondered if she hadn’t sat on a wasp’s nest. And each and every smack renewed the pain until she began to know what he meant about not being able to sit still. She was pretty sure she would be experiencing that for herself very soon.

“Hush now,” he replied, not unkindly. “We’re almost through.”

When she felt his fingers at the ribbon of her drawers, she gasped aloud and tried to bolt off his lap.

“None of that now,” he scolded firmly, keeping her right where he wanted her.

“I decided you need a more memorable reminder to watch your tongue at all times—even when your bottom is stingin’. So these last few will be on the bare.”

Her stomach twisted something awful at his pronouncement. He couldn’t be serious… and yet, she knew all too well that he didn’t say things like this lightly. “Wesley…” she mewled. “Please… I’ll be a good girl.”

“Of that I have no doubt, darlin’, at least you’ll do your best for a time. But that doesn’t change what I have to do. Now hush and take the rest of your punishment. We’re almost through.”

Almost turned out to be another dozen swats just as hard as the ones before it. But having no protection between her already sore, aching behind and his hard, firm hand made them almost impossible to bear. She was squirming and crying out at the top of her voice with each and every swat, the bravery she’d shown during her switching a thing of the past. She’d thought the burning sting of the switch against her bottom had been hard enough, but to have his hand paddling where the switch had landed only minutes ago was an entire new degree of pain. Add to it the humiliation of knowing that he was seeing her very bare bottom, and Libby was feeling awfully sorry for herself by the time he was finished. When he let her sit up, her face was streaked with tears.

“If that happens again after we are wed,” Wesley said, gently wiping her cheeks, “you will take the same punishment entirely on the bare, and only after I’ve washed your mouth out with soap.”

She grimaced at the very thought and considered telling him she’d never marry him under such conditions. But they would both know it was a lie, because despite the awful things he promised, she couldn’t resist relaxing in his arms as he comforted her.

2016-10-30
+admin
Previous: Their Defiant Human by Ivy Barrett
Next: His Naughty Little Housewife by Katie Douglas