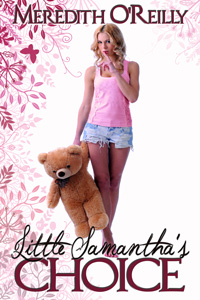 After twenty-five-year-old Samantha Briggs leaves an initially minor sickness untreated, the illness worsens quickly and she ends up feverishly sleeping the weekend away. Her husband, Jackson, stays by her side and sees to all of her needs. But when she wakes up wearing a diaper and footie pajamas, she is furious. Jackson apologizes, but he does admit that he has always yearned to care for Samantha like a loving daddy.

Samantha is shaken by this revelation, but after some reading and some thinking, she agrees to try being Jackson’s little girl. She soon finds herself happily immersed in a land of games, dolls, bedtime stories, and her daddy’s loving care for her every need. She isn’t sure how she feels about wearing a diaper, and she definitely doesn’t like the spankings she gets when she’s naughty, but the peaceful surrender that comes with being her daddy’s little girl makes her feel as though every stressful part of her life has been erased.

Samantha and Jackson fall into a routine: she is an adult on the weekdays, and a little girl—and sometimes a baby—on the weekends. But when she slips up and embarrasses herself by behaving childishly during a stressful morning at work, she reconsiders their new relationship. Will she give up the lifestyle she’s grown to love so much, or can she come to accept that there is nothing wrong with choosing to be her daddy’s little girl?

“Okay sweetie, let’s get you undressed.”

Very quickly, he had undressed me and I was standing before my husband, naked.

First, he put a cute little bra with small stars on me. Then he told me to put my hands on his shoulders while I stepped into my underpants. As he pulled the underpants up my legs and settled them on me, I noticed that they felt bigger and bulkier than regular underpants would. I glanced down at the underwear, but they looked like normal underpants to me—although they had little Disney Princesses all over them.

When I gave my husband a questioning look, he said, “Those are training pants. They are a little bulkier than normal underpants, but in case you have an accident, you won’t make a mess.”

“Samantha,” he growled, “remember, you are supposed to be four years old right now. Four-year-old girls listen to their daddies and do not complain about having to sometimes wear training pants. If they don’t behave, then they will get a spanking.”

“Yes, but I’m twenty-five years old! You know that I know how to control my bladder! I won’t wear ‘em!” I shouted, crossing my arms over my chest.

Before I knew what happened, I was sprawled out on his lap as he sat on the day bed. I felt one of his elbows settle on my back, and then I felt the other hand pull my training pants down so my naked bottom was exposed, and then he started to spank me.

Smack! “You will not—talk to your—Daddy that way!” he growled, spanking my bottom after every few words he spoke.

I couldn’t move a muscle. I was so in shock at being put over his lap and receiving a spanking for talking back. I hadn’t been spanked since I was a little girl.

Smack! “You will—trust that I know—what is best—for you!” he continued lecturing me as his hand continued its torture on my bottom.

Now that the novelty of getting spanked had worn off, my bottom was really starting to hurt. It stung worse every time his hand met my bottom. I tried to squirm out of the way to avoid his hand, but I could hardly move. The heat of the slaps were starting to radiate their way all around my backside. I tried to hold my tears in, but within seconds I was letting them fall, pleading with him to stop and promising that I would behave.

He must had been satisfied that he had gotten the point across because then he stopped spanking my bottom and began gently rubbing his hand around the area he had been spanking. I didn’t like that. It made the burning feeling spread across my entire bottom and somehow made me feel ashamed for ever having misbehaved and getting into this position.

At that point, I was sobbing my heart out. I was embarrassed because I was twenty-five years old and was getting a spanking and about to be put in training pants. But mostly, I was disappointed that I had upset my daddy so much that he’d had to spank me. “I’m… s-s-so sorry!” I cried out in between sobs.

Finally, he stopped rubbing my bottom, which was probably the color of a fire engine, and said, “It’s okay, muffin, you’re forgiven.”

2014-07-28
+admin
Previous: Dimitri’s Desire by Maddie Taylor and Melody Parks
Next: Alice and the Colonel by Jaye Peaches