Little Scarlett and the Doctor by Rose St. Andrews 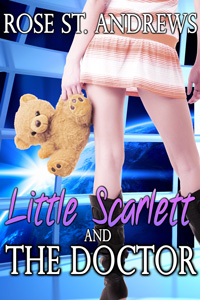 After her ship crashes on a far-off planet, twenty-seven-year-old astronaut Scarlett Collins is shocked to wake up in a re-creation of her childhood home. Stranger still is the fact that an eight-foot-tall alien man who calls himself Azul has apparently been seeing to her every need.

Azul is fascinated by Scarlett’s responses to various stimuli—especially those of a sexual nature—and he sets out to learn more. A thorough, humiliating investigation of her body’s secrets soon reveals all the shameful desires Scarlett has long kept hidden, and once her yearning to be spanked, dominated, and cared for like a little girl becomes known to Azul, he takes it upon himself to give her exactly what she has always needed.

“I shall endeavor to perform the act correctly. How long is sufficient? That element was unclear.”

“Well, it’s my understanding that a proper spanking doesn’t really start until you wish it was over.”

“Hmmm, that also sounds contraindicated. However, I shall trust your judgment. For now, I shall begin.”

He wrapped his left hand about her ribcage and placed his right on her pert bottom. She jumped slightly. His hand easily covered her entire ass. His hand withdrew, and then came the smack.

It was a disappointment.

Another fell—harder, but still weak.

He delivered a third, which was better, but not nearly enough.

That one she really felt.

“Ouch,” she yelped. “Now you’re getting the hang of-ow,” she added, as another firm one landed squarely across both cheeks.

After that, he set up a nice pattern of spanks, and she was soon yelping and howling as she wiggled across his broad lap. However, he was nothing if not thorough, a good listener, and a quick study. He covered her firm bottom from waist to tops of thighs, and he held her tight. She wasn’t going anywhere.

The heat and sting began to truly build up in her ass, and it also began its long slow migration to her sweet spot. So, while she continued to yelp and howl in pain, the fires of pleasure were also kindled, and it was clear he was starting to feel her positive energy. That encouraged him on, and became quite the feedback loop.

Then something happened that amazed her beyond belief. As the scene progressed, he really got into it. He did everything right, too right! Pausing briefly, he flipped up her short skirt, and then continued.

“You’re a naughty little girl, aren’t you, Scarlett,” he blurted out.

“Running away from Daddy, getting lost in the woods. What do you have to say for yourself?” he scolded.

“I… ahhh, ow ouch! I’m sorry, Azul, I didn’t—ouch,” she howled at a particularly hard spank.

“Do you call your daddy by his name, little girl?”

“Not half as sorry as you’re going to be,” he said, stopping for a moment.

She strained her neck to look around, concerned as to what he might be up to. His large fingers gripped the waistband of her panties, and with one quick tug she was bared. Before Scarlett could utter a word of protest, he continued spanking her, and he did not hold back one bit! She yelped and howled, squirmed on his lap, and begged for mercy. It was all for naught. He didn’t let up, and she finally broke and began sobbing.

2014-10-07
+admin
Previous: The Rancher of Gemini Canyon by Chula Stone
Next: A Difficult Patient by Loki Renard