Lucy and the Doctors by Ava Sinclair 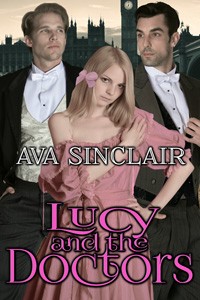 Confined to an institution and incorrectly diagnosed with acute nymphomania after being falsely accused of promiscuity by a powerful judge, eighteen-year-old Lucy Priven has no idea what to expect when she is removed from the asylum by two handsome doctors. After she is informed that she is now their legal ward, she soon finds herself being prepared for a thorough, intimate medical examination. Her refusal to disrobe for the exam earns her the first spanking of her life, but once she is stripped bare and fully on display she cannot hide her helpless arousal.

Doctors Benedict Crane and Thomas Allard are Victorian London’s foremost experts on curing sexual frigidity in women, and their intensely humiliating but highly effective techniques have helped them build a thriving practice. But as they embark on a new study exploring potential treatments for wanton female behavior, Benedict and Thomas are in need of a suitable subject for their research, and Lucy seems to fit the bill perfectly. To their surprise, however, it quickly becomes apparent that Lucy has been misdiagnosed.

While her body responds beautifully to both firm discipline and a man’s pleasurable touch, she is no nymphomaniac. Upon learning more about her past experiences, they decide that the best course of action is to regress Lucy to a childlike state, and before long she is delighting in the attention of her new guardians. But as she flourishes under their care, Benedict and Thomas must confront their growing attraction to their ward. When it becomes obvious that her need for them is just as intense as theirs for her, will the doctors be prepared to claim Lucy fully and give her exactly the medicine she requires?

She caught her lower lip and worried it with her teeth for a moment. “There’s no other way?”

“I’m afraid not,” he said. “But there’s more. In order for the medicine to be quickly absorbed, you must undergo a cleansing. Both the cleansings and the medication will be part of your regular routine, so you’ll need to be a good girl and listen to both of us, understand?”

“Yes,” she said quietly, but he could tell that she was nervous.

“Do not worry, little one.” Behind her, Benedict was already leaning down to raise her shift up and off. “We will take care of you.”

Lucy did not resist being led to the table. Thomas had already filled a large rubber bag with the cleansing mixture designed to relax and cleanse her insides. As he watched his colleague get her into position, he realized that this exam would likely test all three of them. Lucy was on all fours, and as Benedict instructed her to lower the upper portion of her body onto the exam table, the moons of her bottom rose in its perfection, the cheeks parted just enough for him to glimpse the tight dusky rosette of her bottom hole above the juicy peach of her glistening pussy.

He tried to ignore his cock twitching to attention as he patted Lucy on her haunch and began explaining what would happen next.

“I’m going to insert this nozzle into your bottom, Lucy,” he said. “It may sting a little as your bottom has never had anything inside it, I’d wager.”

She was looking back now and shook her head, affirming that she’d been yet untouched there.

“Once it’s seated inside, I’ll open a valve on the bag you see hanging by the table. A warm mixture in the bag will run through the tubing and out the nozzle into your bottom.”

“But it looks to be so much!” she said, her bottom lip quivering prettily. And Thomas realized it must be a daunting sight, the large bag bulging with contents waiting to fill her.

“Not to worry,” Benedict objected. “We are both right here to help you through it, and you’ll feel so much better once it’s over. I promise.”

She relaxed a little and Thomas guided the lubricated nozzle to her opening. He pressed the shiny tip of it against her rosette, and it twitched in a manner that had him stiffening all the more.

He did not delay any longer, and continued to watch, mesmerized, as the nozzle slid into her bottom. He could see the outer rim of muscles stretching to accommodate the invasion, but beyond a little whimper, Lucy offered little by way of protest. In fact, he noted with a degree of surprise that the further he pushed the nozzle in, the wetter the pussy below it became.

2016-02-21
+admin
Previous: Assigned a Mate by Grace Goodwin
Next: Shared by Her Soldiers by Dinah McLeod