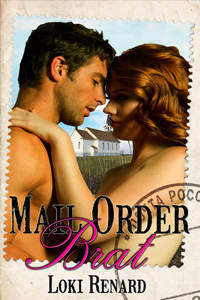 Soon after leaving her native Russia to marry an American, Annika discovers that her husband-to-be is a liar and a cheat. Rather than return home, she runs away and begins living on the streets. When she is caught by Pastor Steven Soames while breaking into his car looking for a place to sleep, she expects the worst—arrest and deportation—but instead the handsome preacher invites her to his house for a warm meal.

Steven’s kindness impresses Annika and she is excited when he offers to let her stay in the guestroom at the parsonage in the little town of Sweetville, even after he informs her that while under his roof proper behavior will be expected and defiance will earn her a sound spanking.

Though Steven is a widower and he’s never been interested in another woman since his wife’s passing, and despite Annika’s penchant for flagrant disobedience—something Steven knows will need to be cured with a firm hand applied to her bare bottom—the small-town preacher and the feisty Russian brat soon find themselves falling in love.

But when Steven proposes, Annika cannot help but worry that he is only offering marriage out of pity in order to let her stay in America. Can she bring herself to put aside her fears and trust the man who has claimed her heart?

“Have you been spanked before?”

“I find that hard to believe. You’re the mischievous type.” He patted her bottom lightly, trying to avoid the temptation to caress her cheeks—and failing.

“I am a good girl,” she said, her voice slightly muffled. “I study hard. I work hard. Only when I come here, to America, am I bad. I break the rules. I leave the man I promise to marry. I steal food. I break into cars. I…”

“You did what you had to do to survive. You don’t have to do any of that anymore.” He slapped her bottom lightly. She didn’t yelp or growl or complain. She relaxed. He felt her settle over his lap and sigh softly, her thighs spreading a little as the tension drained from her body.

He began spanking her firmly, sound slaps landing against the lower curve of her cheeks, one to each side, back and forth in a disciplinary tattoo. He expected complaint as his palm grew warmer, but there was none. Glancing in the mirror across the room, Steven saw that her eyes were closed and there was a little smile on her face. She was enjoying herself. So was he.

“No,” Annika purred toward the carpet. “I like this very much.”

There was no pretense with the young woman. She didn’t play mind games or try to be coy. She just said what was on her mind. Steven liked that.

“Good,” he said. “So if I send you to bed now, I’ll have your word that you’ll still be here in the morning?”

“Yes,” she said to the twisted wool pile beneath her fingers. “I promise.”

Steven smiled and patted her bottom gently before renewing the slaps at a greater tempo. Each one elicited a little squeak from his guest. The sounds went straight to the part of his mind that did not discipline because it was the right thing to do, but because it was an exciting, sensual thing to do.

He paused for a moment, feeling his heart pound in his chest. He’d given so many spankings over recent years, and not a single one had made him feel the way he did in that moment. Annika’s cheeks waiting under his cupped palm, toned, but soft, yielding to his discipline with feminine grace. She was gorgeous in her submission with a sybaritic figure that could not be disguised by even the most modest clothes.

“You stop?” She looked over her shoulder, hazel green eyes sparkling between questioning lashes.

His mouth was dry. Another important part of his anatomy was growing hard in spite of his efforts to distract himself with mundane thoughts. He didn’t have any control over his physical reaction, but he was determined not to let her know. That wasn’t fair. She’d trustingly laid herself across his lap for what amounted to a welcome spanking, and all he could do was stare down where the fabric of the skirt was sinking between her thighs and will himself not to touch her there.

“I think you understand how this works now,” he said, helping her back to her feet.

“Is not so bad,” she shrugged. “Does not feel like much.”

“Good,” he said, ignoring the little hint of challenge. Oh he could have spanked her harder. He could have bared her bottom and spanked her bare flesh until she begged him to stop. But she didn’t deserve that and his impulse to lift her skirts had nothing to do with discipline.

With a great measure of self-control, and no small amount of regret, he sent his Russian guest to bed.