Marked and Mated: An Alpha Shifter Romance by Delta James 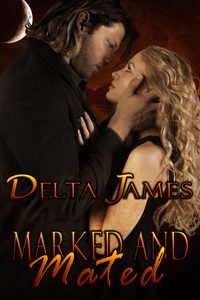 She ran from her mate. Now she must be punished.

Darby Callan doesn’t want a mate, but it isn’t up to her. Her old pack has been disbanded, and when the powerful, handsome alpha of a well-established pack makes it clear that she belongs to him, her instincts reveal the truth of his words despite her furious protests and attempts to escape.

Jean-Michel Gautier knows that his new mate’s past makes her wary of him, but an alpha cannot tolerate disobedience, and when Darby defies him he strips her bare and spanks her until she is sore and sobbing. Her beautiful body’s response to his dominance is obvious, and his stern correction leaves her helplessly aroused, but before he claims her he plans to make her beg.

Naked and quivering with desperate, shameful need, Darby cannot help pleading with Jean-Michel for the climax she has been denied, and soon she is crying out with pleasure more intense than she would have ever thought possible as he makes her his. But when the vicious brute who once hurt her comes looking for Darby again, can she trust her new alpha to protect his mate?

Publisher’s Note: Marked and Mated is a stand-alone novel which is the second entry in the Wayward Mates series. It includes spankings and sexual scenes. If such material offends you, please don’t buy this book. Also note that Marked and Mated shares its setting with Adaline Raine’s previously published books Marked by the Alpha and Rules of the Pack, and it was written only after receiving Adaline’s permission and support.

“Such crude language from such a pretty mouth. Another area we’ll have to work on. But I will tell you this, after I spank you for your naughtiness today, before I mount and claim you, you will beg me to do so.”

“I won’t,” she said, hoping that he could not tell she was becoming more aroused as she was forced to be such close proximity to him.

The steely gaze he gave her was in direct contrast to the grin on his face. “You will, ma choue. And come the morrow, your pussy will rival your bottom for discomfort from my use.” The steel softened and was once again replaced by humorous glint. “As you seem to have resolved your fear, I think it’s time we get your spanking seen to so that I may enjoy the rest of the afternoon between your legs learning how you best like to be loved and mated.”

She started to struggle again, but his strength was far superior to her own. He allowed her to gain her feet, but quickly spun her around and pulled her down over his knee. He braced her upper body on the bed itself and used his other leg to trap hers. She tried to flail her arms behind her, but he caught them neatly in his one hand and pinned her. He let her feel that he was in control. She stopped struggling.

“Good girl,” he said soothingly as he brought his hand crashing down onto her buttocks.

“You bastard!” she screeched.

“Not true. My parents were happily mated for many, many years. They did not outlive each other by even six months. I don’t believe my father wanted to live without her. I never understood that until I sensed you were here.”

Jean-Michel began to spank her. If she’d thought the swats he’d given her thus far were painful, the spanking he was inflicting demonstrated a new level of pain. Darby kicked and screamed and tried everything she could think of to get away from him. She even tried going into that dark place she had with her previous mate where nothing he did could touch her. But hard as she tried, she could not escape Jean-Michel’s presence or his hand that continued to punish her backside. He focused mainly on the fleshiest part of her cheeks and only placed a few swats to her delicate sit spots.

She endured blow after blow. She screamed, she cursed, and still the spanking continued. All the while he spoke soothingly to her. He reminded her that she was being spanked because she’d been naughty but that when it was over, all would be forgiven and he would bring her great pleasure. Finally, she quit fighting him and went limp over his knee. It still hurt and she could feel every swat.

The minute the words left her mouth, the spanking ceased. “There’s my good girl. An apology will always get your spanking mitigated if not stopped. And what are you sorry for?”

“I do, but I want to ensure that you know what you should be sorry for. If you refuse to answer, I’ll go back to spanking and it’ll be at least another ten swats until I think about stopping. Do you want me to resume your spanking?”

“No. I’m sorry for running away from Dylan and for getting Summer and Gina to go with me.”

“And?” Nothing but silence answered his question. “Naughty mate.” He began once more to spank her.

“One—Two—Three—Four—Five—Six—Seven,” he counted out the swats. “Eight—Nine—Ten. Now what was it you were sorry for besides disobeying Dylan and causing trouble?”

He began to rub her heated and painful backside in a loving manner. “That’s right. You heard my call and resisted coming to me. That was very naughty, wasn’t it?”

Jean-Michel released her and helped her off his knee. He stood with her and cradled her in his arms while she quietly cried.