Marked by the Alpha by Adaline Raine 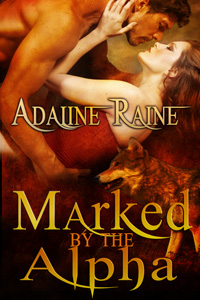 Dani had always been a lone wolf and she had no desire to join a pack, but that didn’t matter to a true alpha wolf like Mason Daniels. When he finds out that human hunters have been threatening Dani, he puts his mark on her.

Unfortunately, the hunters are foolish enough to disregard his mark, and Dani is captured. After Mason and his pack rescue her from certain death, Dani is given no choice about joining Mason’s pack for her own protection. She soon learns that Mason is fully prepared to spank her bare bottom as often as is necessary to teach her to respect and obey him.

With more hunters closing in and the pack under threat, Mason begins to realize that he must claim Dani as his mate for life—whether she likes it or not—before his need for her drives him mad. At the same time, she is forced to learn her role in the pack and come to terms with her instinctual need to submit to Mason as her alpha and her mate.

“If you growl at me again I will show you right now just how this is going to play out.” Mason’s words came out cool and collected and it just poked at Dani more.

“I am not yours to command,” Dani said fiercely, feeling more off-balance than ever before. One minute she was ready to impress him and please him, and in the next she was ready to force him to claim her in every sense of the word. She took a step towards him.

Mason grabbed her hair and pulled her the rest of the way. She stumbled and wound up on her knees. “You may be dominant, but not with me,” he warned her. He let go of her hair and she glared up at him. “You are going to respect me, Dani, no matter how long it takes,” Mason said, and then reached down, pulled her up into his arms, and set her on the edge of the table. “You should be warned that you will not like how alpha males teach their females respect.”

Dani slid off the table and sat back in her seat while she glared daggers at him. “If it involves bowing down and letting you walk all over me, then you and your pack can go and—”

Mason grabbed her chin. “I tried being reasonable, but now I am going to teach you to respect me.”

“You get your hands off me!” Dani growled. She was done being rational. She wanted Mason Daniels out of her house and out of her business!

Mason shook his head. “I warned you about that,” he said firmly, then picked her up and threw her over his shoulder before she could react.

“Mason Daniels you put me down or so help me—”

Dani jumped. He had smacked her ass! What the hell? She was too shocked to comprehend what he had just done, let alone what he might mean to do next. While she was trying to remember what he had said earlier in the store about respect, he carried her across the room, then set her on her feet in front of him and sat down upon her couch, all the while keeping a tight hold around her waist. Dani tried to escape from his grasp, but she was suddenly yanked over his lap and then pinned by one of his legs. She bucked but had nowhere to go. “I will never forgive you for this,” she spat between her teeth as he grabbed her arm and held it behind her back.

“I am not going to stop until you have learned a good lesson,” Mason whispered as he rested his other hand on Dani’s back.

The nerve of him! Dani had never been in this position before in her life! She bucked up against his palm. “My pain tolerance is epic, Mr. Daniels.”

2013-01-16
+admin
Previous: My House, My Rules by Constance Masters
Next: A Bride For Ben by Chula Stone