Married to Her Master by Aurie Jameson 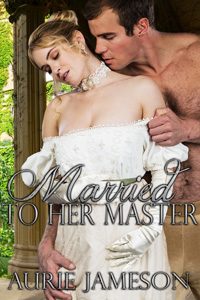 Celeste was quite displeased at being forced to marry Tarik Woodword, and over the course of the year since the wedding she has done her best to show her lack of enthusiasm for the match. But when she puts her safety at risk with her childish behavior, Celeste learns the hard way that pushing Tarik too far will have consequences, and it isn’t long before she is sobbing over his knee as her bare bottom is spanked hard and thoroughly.

Despite her shame at being chastised in such a humiliating fashion, Celeste cannot hide her body’s response to her stern, handsome husband’s strict correction, and when he takes her in his arms and claims her properly, his skilled, dominant lovemaking is more pleasurable than she would have thought possible.

Celeste was given to Tarik as a wife for a very specific reason, however. As one of the few people who share her unique magical abilities, he intends to provide her with the guidance she needs in the use of her power, and when evil men try to do his wife harm, Tarik decides that the time has come to start Celeste’s training in earnest.

Though she soon finds herself blushing crimson as she is stripped bare and trained in the most shameful ways imaginable, with each passing day Celeste’s desire for Tarik burns hotter. But even as he teaches her what it means to submit to him completely as both her husband and her master, can he keep her safe from both her enemies and her own recklessness?

Publisher’s Note: Married to Her Master includes spankings and sexual scenes. If such material offends you, please don’t buy this book.

Only when his wife was completely restrained by the cuffs did Tarik release his hold over her body. He walked around her, taking his time to inspect Celeste. It was truly a tempting sight, the young woman sprawled out across the bench, her bottom poking out, her limbs tied down. Her slim legs were spread apart, fully exposing her pussy and anus.

Tarik walked around the bench to stand in front of Celeste again. He bent down so he could look into her eyes.

“Don’t look so glum now,” he chided gently, tilting her chin up with his finger. “This is not meant to be a punishment but a lesson. Cooperate and do your best and you will be rewarded.” He kissed her gently on the forehead before turning to stand behind his wife.

Addie and Betsey looked on, trying to look uninterested but their wide eyes betrayed them as they watched curiously.

“Now I want you to close your eyes and try to feel for my energy,” he told Celeste. With that, he raised his hand and brought it down on the pert globes in front of him.

Celeste gasped at the first smack and began to wriggle but stopped when she realized that Tarik wasn’t spanking her very hard. They were light, crisp strikes that had her bum jostling but did not sting or burn terribly. What he was asking her to do wasn’t difficult since she knew where to focus.

“Done, sir,” she said when she felt his presence.

“Good,” he said simply, pausing in between the light smacks to gently rub the soft mounds. He grinned when Celeste purred slightly. She would have drummed her feet against the floor but her toes were a couple of inches off it. She couldn’t help but suspect that had been intentional as well since it forced her to keep her bottom soft.

Tarik kept rubbing her cheeks roughly, flattening them with the flat of his hand. He kneaded her bottom then, digging his fingers into the warm, slightly pink flesh, causing delightful squeaks to come from Celeste’s lips.

Celeste pulled on the restraints as the familiar warmth between her thighs began to grow. She whimpered, completely humiliated at being spanked and teased in front of others. She looked up and was surprised, however, to not see any sign of Addie, Betsey, or Edgar. She turned her head and Tarik swatted her hard.

“Where’d they go?” she couldn’t help but ask.

Tarik didn’t answer but walked over to the cart. Celeste watched him in confusion but immediately began to struggle when he picked up the wooden spoon.

Purposefully, her husband returned to his position behind Celeste and tapped the spoon on her quivering right bottom cheek. “What did I say would happen if you spoke out of turn again?” He asked this expectantly, giving the cheek a tap when she did not answer promptly.

“You said that I would get a full punishment,” she recited reluctantly.

“And I am a man of my promises,” Tarik said, bringing the spoon down with a snap, right where bottom met thigh.

2017-10-22
Chris
Previous: Seeking Her Out by Summer Graystone
Next: Her Cyborg Daddy by Katie Douglas