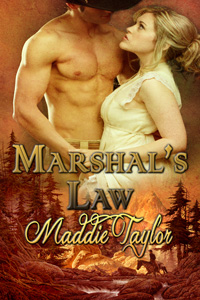 When Janelle Prescott is thrown from her car as it careens off a slippery road, she expects to wake up in a hospital. Instead, to her utter disbelief, she wakes up in a jail cell which looks like something from an old western movie set. It is there, hurt and alone, with no idea what happened or how she will get back home, that Janelle first meets Aaron Jackson. As she regains her wits, however, Janelle realizes that something is terribly amiss, and her worst fears are confirmed when she learns that Aaron is the marshal of Cheyenne County, Wyoming… and the year is 1878.

When an injured, apparently addle-headed woman falls into his lap, Aaron takes it upon himself to keep her safe and nurse her back to health. Truth be told, he is instantly attracted to her despite her sharp tongue and her bizarre story—a story which he is quickly forced by the evidence to accept as genuine. After Aaron takes her under his wing and into his family’s home, the two clash frequently, but Aaron is more than ready to lay down the law… even if that means a good, hard, bare-bottom spanking for this feisty brat from another era.

Having little choice, Janelle must learn how to live as a woman in 1878, including submitting to the firm-handed marshal who, in spite of everything, seems to have laid claim to her heart.

Publisher’s Note: Marshal’s Law is a stand-alone novel which is the first entry in the Jackson Brothers series. It includes spankings and sexual scenes. If such material offends you, please don’t buy this book.

“No! Aaron, you can’t do this!” Her heart was racing and skipped a beat as his hand slid over her butt. Grasping her hip, he pulled her in closer and secured her with a strong arm at her waist.

“I think you know that I can,” was his crisp response. He proved his claim by pulling up her skirts and flipping them onto her back. She was left with only the thin layer of her drawers as protection.

“You can’t manhandle me like this, you big brute.” Her pleas went unanswered, and she squealed as she felt the first slap of his huge hand on her bottom. It was followed by another and another. Stunned, Janelle was breathless. Her thin drawers seemed non-existent as he spanked her again and again. When he moved from her bottom cheeks to her upper thighs, she shrieked and flung a hand back in self-preservation. “Stop, please Aaron!”

He firmly grasped her wrist and held it high on her back. “No blocking, Janelle. I don’t want to injure a finger.” He continued without pause, delivering firm, unrelenting swats to her already burning bottom.

“Ouch, Aaron! I’m sorry. Please stop, and I promise I’ll do what you tell me to!”

“Now we’re getting somewhere, darlin’. But you’re getting the hiding you deserve and will still do what I tell you.”

He paused for a moment, and she felt him tugging at the ties to her drawers. “What are you doing? Please, don’t take down my underpants. Aaron!”

“Settle down, Janelle. Spankings are always given on the bare. Now lie still and accept your punishment like a good girl.” Aaron finished untying her drawers, then separated the linen material baring her full, soft cheeks.

Janelle gasped as the first blow on her bare skin robbed her of breath. Kicking her feet, she tried to loosen his grip, but he simply adjusted his position so that his heavy leg anchored her from behind as he proceeded, unfazed.

“Please, sir. I promise to behave.” Mortified beyond belief, the tears poured down her face as he kept up a seemingly endless torrent of spanks.

2013-12-07
+admin
Previous: The Writer and the Rancher by Chula Stone
Next: Taught to Serve by Jaye Peaches