Master of Her World by Lily Harlem 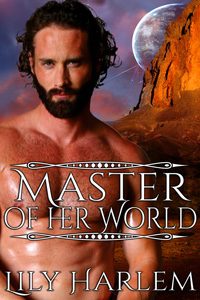 With her own world facing catastrophic environmental collapse, Briella’s only option is to seek refuge on the planet Roun, but the cost of her choice will be her freedom. Upon reaching her new home, she is met by Gastion, the stern, handsome man to whom she now belongs, and he wastes no time in making his expectations clear. Briella will obey him in all things and make her beautiful body available to him in every way, or her bare bottom will pay the price.

Gastion quickly demonstrates that his warnings are not to be taken lightly, and when he discovers that Briella has smuggled prohibited contraband from her home planet she is punished thoroughly. But while he is more than ready to be strict with her, Gastion soon proves that a skillful master can bring his slave pleasure beyond anything she could have imagined, and Briella finds herself surrendering willingly even as he claims her in ever more shameful ways.

Their passion blossoms into romance, but there are strict rules governing interactions between masters and slaves, and it isn’t long before Gastion and Briella’s relationship attracts scrutiny from the governing authorities. Can their love survive the wrath of the planet’s powerful king?

She was aware of the room darkening for a moment. A cloud over one of the suns.

Then he was back behind her, stroking her smarting buttocks and the room lightened again. “You’ve gone as red as the third sun,” he said. “It’s very pretty.”

“Yes, Sir.” His touch was hypnotic to her, stroking her flesh, spreading the heat from his slaps. Her pussy trembled.

“And you will look even prettier with this inside you.”

He tugged at her left buttock and cool air washed over her anus.

“What… Sir… is it?” she asked, once again gripping the sheets.

“It’s a device for stretching you, preparing you for my cock.” Something cool and slippery touched the very center of her hole.

She bit on her bottom lip and tried not to shift away from it. Crying out or wriggling would displease her master and that was the last thing she wanted to do.

“Good girl, keep still and take it. It’s not impossible for you to do this.”

He began to ease the cold hard device into her. Her hole stretched, as if the diameter was increasing the deeper it got.

The sensation wasn’t painful as she’d feared, only different. New nerve endings were being stimulated, a virginal set of muscles stretched by an alien object.

On and on he pushed, slowly and determinedly.

“Oh, please, Sir,” she moaned as it reached the point she wasn’t sure she could accommodate any more. The nip of pain was making her toes curl. She shut her eyes and tensed her belly.

“It’s nearly there. You are doing so well. So pretty…”

Pretty? She wondered how she looked with her asshole being filled and her buttocks flame red. They hadn’t told her about this at the training camp. Many details had been missed. But then perhaps they were unique to her master. He was rather special, and he also didn’t play by anyone’s rules but his own.

It didn’t feel tiny, it felt huge. A cry was beginning in her throat. It was too much.

Suddenly there was a popping sensation, as though whatever it was had gone into her entirely. The stretch in her anus disappeared and the tight ring of muscle clamped shut.

“That’s it.” He tipped forward and spoke at her ear. “It’s in. You managed wonderfully.”

“And now you will keep it inside you for the afternoon, while you complete your tasks.”

2016-12-11
+admin
Previous: Her Outlaw Daddy by Jane Henry
Next: Her Christmas Daddy by Dinah McLeod