Mastered by the Highlanders by Katie Douglas 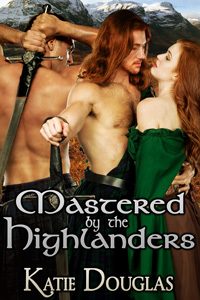 After English soldiers invade her village, nineteen-year-old Callie seeks shelter in a remote castle deep in the highlands. The laird of the castle, Andrew of Clan MacKinnon, offers her a job as a cook, but he makes it clear that living under his roof will mean obeying him without question or facing the consequences.

When Andrew takes it upon himself to bathe her, Callie resists and quickly earns herself a painful, humiliating spanking, but to her surprise the punishment leaves her not only blushing with shame but also helplessly aroused and longing for the handsome laird to dominate her completely. Callie is further shocked when Andrew’s close friend, Brandon, returns to the castle and she learns that she will be expected to submit to him as well.

Though she finds it difficult to believe that two powerful men would want a common girl like her, Andrew and Brandon inform Callie that they have always intended to share a woman, and it isn’t long before she finds herself being brought to one shattering climax after another as she is claimed hard and thoroughly by both of them at once. But will the men cast her aside once they have satisfied their desires, or do they truly plan to make her theirs forever?

Brandon leaned in and opened the box. Callie stared at the contents.

“What are those?” she asked. They looked like elongated ceramic mushrooms.

“These are special plugs made to prepare young ladies’ bottoms,” Brandon said with glee. Callie could tell he’d been looking forward to this for a while. She didn’t know whether she shared his excitement.

“We will start with this one,” Brandon said, pulling out the smallest plug, “and work our way up to this one.” He grinned evilly as he showed her the largest one. Callie couldn’t stop staring at it.

“I don’t think there’s enough room inside me for that to fit!” she exclaimed.

“That’s why we’re starting with this one,” Brandon reminded her. He handed it to Andrew, whom Callie could hear uncorking the jar of liquid.

“I want to make sure it’s nice and lubricated so it just slides in,” Andrew said. “Remain still, this will feel… well, you’ll see.”

Callie felt a hand on the small of her back and then the cold feeling of something unfamiliar pushing against her ass. This was entirely new territory; she had never so much as put a finger back there. She gasped as the plug, which had looked so tiny compared to all the others, stretched her virgin ass and touched her deeply inside as Andrew pushed it in.

“It’s too big, sir! It’s not going to go!” she said, thinking she couldn’t possibly take it in any further.

“Bear down on it, little one, and it’ll feel better in a moment.” Brandon was in front of her, reassuring her. She did as she was told, and seconds later it just slipped inside and seemed to sit snugly, with the narrowest point at her entrance.

2016-06-11
+admin
Previous: Lessons from the Millionaire by Jinx Neale
Next: Governing His Bride by Emily Tilton