Mastered by the Millionaire by Dinah McLeod 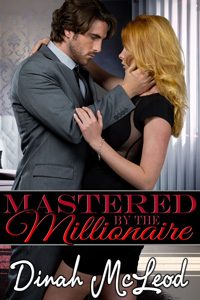 Geoffrey Peirce has always been a man with a strong commitment to his work, but when his beautiful young fiancée informs him that she plans to end their engagement as a result of his long hours he decides upon a bold gamble.

Nicole is stunned when she hears Geoffrey’s proposal. If she will spend a week with him at the four-star resort he co-owns in order to give their relationship a fresh start, then afterwards if she still wants to break things off he will make sure she is set up financially for the rest of her life. There is only one catch: during their week together, she will be expected to submit to him completely, and failure to obey him will earn her a sound spanking on her bare bottom.

Though she is shocked to discover that he has hidden this side of himself from her throughout their engagement, Nicole cannot help being intensely aroused by the thought of surrendering herself to both punishment and pleasure at Geoffrey’s hands. She accepts his offer, and soon enough she is blushing crimson and quivering with desire as he teaches her what it means to belong to a dominant man. But when the week is up, will she take the money and run or stay by his side and delight in being mastered by the millionaire?

Next, I hooked my thumbs in her panties, sliding them down slowly, inch by inch, teasing us both. Her sharp intake of breath only served to heighten my pleasure. Did she have any idea how my cock strained at my pants?

Once her pale, creamy orbs were uncovered, I began to rub her backside, waking any nerves that might be daring to slumber. If she was going to take me seriously, I needed to show her that I took this—and her—seriously as well. But I wasn’t going to rush it. Knowing that there were only so many spankings I could fit into a week and that she might still choose to walk away when it was all over, I wanted to relish each and every moment.

“Tell me why you’re getting spanked, Nicole.”

“Because you said you were going to.”

I nearly chuckled at her adorableness but changed it to tutting instead. “Why did I tell you that, young lady?” I watched as she clenched her cheeks together as she waited, anticipating the first swat.

“Because I didn’t read the contract.”

“That’s right. How many times did I tell you to read it?”

Before this week was over, it wouldn’t be an addendum, it would be second nature to her. I was a patient man—I was more than happy to teach her. “Three times, Nicole. How many times should I have to repeat myself?”

“Um, well, we hadn’t signed the contract yet—”

The way she gripped the sheets told the story of how the stern inflection in my voice affected her. “You shouldn’t, sir.”

“That’s right. I should tell you once and once only. And yet, you felt it necessary for me to repeat myself two more times. How do I feel about repeating myself, honey?”

My hand crashed down on her pale, unsuspecting cheeks, landing directly in the middle. I could feel my palm begin to sting, but the sunburst of pink forming on her cheeks made it well worth it. I was equally impressed by how Nicole took it—she let out a surprised gasp, but the screeching wails I’d heard in the past from women who couldn’t handle a single swat raised her mightily in my estimation.