Don't Miss
Home / Blog / Mastered for Their Use by Ivy Barrett

Mastered for Their Use by Ivy Barrett 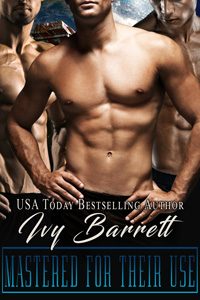 Erin Dorati didn’t ask for help from the Ventori, and just because they freed her from the human thugs who were holding her captive doesn’t mean she’s going to put up with being kept in custody by her supposed rescuers. She’s certainly not going to just lie there and take it while three of them evaluate her suitability as a mate, but when she nearly perishes in the wastelands during a failed attempt at escape, it is one of the infuriatingly sexy aliens who saves her life.

Urrya, Oseth, and Azra intend to share a female, but when the battle-hardened warriors inform Erin that they have chosen her, she does her best to pretend to hate the idea. Their visits to her dreams tell another story, however, and they quickly set about mastering both her body and her mind, teaching her how pleasurable it can be to surrender herself completely to her mates.

Their bold dominance arouses Erin deeply, and despite her efforts to deny it, her need for them merely increases each time she is stripped bare for a painful, embarrassing correction of her behavior. Her bond with her mates grows stronger as she is claimed ever more thoroughly, sometimes by all three of them at once. But when the alien scourge who nearly wiped out the human race attacks Erin’s new home, will she lose everyone she cares about a second time?

Publisher’s Note: Mastered for Their Use is a stand-alone novel which is the fifth book in the Ventori Masters series. It includes spankings and sexual scenes. If such material offends you, please don’t buy this book.

“What happens when you lie to me?”

Oh, God. Her core clenched and her clit twitched as her mind formed the words. “You p-punish me.”

She glanced to the side and saw his bed, not the one in which she’d fallen asleep. This was a dream. It had to be a dream. Still, she felt the carpet beneath her feet and the bedding under her knees as she positioned herself on her hands and knees. Why was she doing this? He was going to hurt her, make her scream. So why was she offering up her ass like a sacrifice?

“Spread your legs and lower your head. Rest your forehead on your folded arms.”

He wasn’t forcing her into position, nor was he tying her down. She was doing this to herself, presenting her ass for punishment and displaying her pussy. What the hell was wrong with her?

Even as the question echoed in her mind, she opened her legs and lowered her head. Her folds parted and currents of air teased her slit. Would they never fuck her?

She closed her eyes and gritted her teeth. They all loved to tease her other opening. There was no part of her body they didn’t explore, and would one day—hopefully soon—penetrate. Very slowly, she moved her legs even farther apart and arched her back. Her ass cheeks gradually parted, displaying her puckered hole for his inspection.

His hand touched her upturned ass, squeezing gently. “Urrya better fuck you soon. I’m tired of waiting.” His fingers slid lower, then pressed into her slit, sliding easily on the liquid they encountered. “You’re already soaking wet. This will be even easier than I thought.” He pushed into her aching core with one of his fingers, while his thumb gently rubbed her clit.

She gritted her teeth, determined to resist him. “You’re breaking the rules,” she ground out. “You’re only supposed to use pain.”

His hand lifted and he said, “You’re right. I apologize. Your pussy is so very lovely, it’s hard to resist.” He cleared his throat, then asked in a clear, authoritative voice, “Did you lie to me, Erin?”

Would it do any good to deny it? They both knew she wanted this as badly as he wanted to do it. “Yes.” Her voice shook and tears flooded her eyes, so she squeezed them shut.

“Did you know what I’d do if you lied to me?” Azra was echoing Oseth’s claim, that the males always made sure the females understood what was happening and why.

“Then do you agree that I should punish you?”

This was so unfair. He was basically making her ask for the spanking or whatever he had in mind. “I understand your position, but I think you should let me off with a warning.”

She heard an odd shuffling and glanced over her shoulder. He was pulling off his gloves, which reached halfway up his forearms. Did he want his hands bare so he could spank her, or was he going to spank her with the gloves?

He swung one of the gloves, fingers down, connecting with her ass with surprising force. She gasped and whipped her head back around, not wanting to add to her punishment by breaking the position he’d requested. The second slap lit up her other cheek, but the sting had yet to fade from the first side. This hurt worse than the spanking she’d endured in the first dream. And still, her body warmed and clenched, processing the pain as arousal.

She tried to breathe through each smack, dispersing the pain as she slowly exhaled. It worked for the first few rotations, but soon the pain compounded, escalating faster than she could absorb it. She cried out sharply and helplessly tensed up. The next slap tore a scream from her throat.

He trailed the glove across her burning cheeks, soothing her with the coolness, yet irritating the already tender skin. “You aren’t just lying to me. You’re lying to yourself.” He swung the glove upward between her legs, the contact half-stinging slap, half-caress.

Clawing at the bedding, she helplessly fought against the orgasm barreling toward her. “Please. Please…” The word sounded almost mournful as he spanked her pussy again and again. Each slap grew harder until one sharp burst of pain forced the orgasm from her quaking body. She cried out in frustration and fear as strong, rippling spasms gripped her core and pulsed throughout her body.