Mastering His Mate: An Alpha Shifter Romance by Delta James 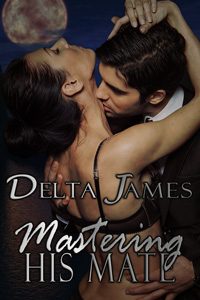 He has been patient with his mate for long enough. Now she needs to be mastered.

After she was injured in an attack by a rogue band of wolves, Rosalyn Kincanon awoke to discover that her life had changed forever. Angry and distraught, she fled from those that nursed her back to health and found her own place in the world. But now the all-female pack she helped lead has been disbanded and the women are to be claimed as mates whether they like it or not.

The moment Oliver Halsey saw Rosalyn, he knew she was his mate. But she was born a human, and the vicious brutes who turned her did so against her will, so he set aside his rights as alpha and gave her the freedom she needed to come to terms with her new reality. Now her time is up.

Oliver knows what Rosalyn needs, even if she doesn’t. When she runs, he will catch her and bring her back. When she disobeys, he will bare her and punish her. He will take her harder and longer than she would have ever thought possible, and she will scream and beg as one climax after another is forced from her naked, quivering body. It is time for his mate to be mastered.

Publisher’s Note: Mastering His Mate is a stand-alone novel which is the third entry in the Wayward Mates series. It includes spankings and sexual scenes. If such material offends you, please don’t buy this book. Also note that Mastering His Mate shares its setting with Adaline Raine’s previously published books Marked by the Alpha and Rules of the Pack, and it was written only after receiving Adaline’s permission and support.

“Tsk, tsk. That’s not true and you know it. I get off as you so crudely put it when I have my cock buried in your pussy and am fucking you good and hard, which, my Rozalyn, will come after I have finished spanking you.”

With that he once again began to spank her. The sensation of a hard hand connecting with her naked, already punished backside was far more painful than either spanking he had given her before. She had made a vow that she wouldn’t give him the satisfaction of reacting. That lasted for two solid swats.

“Oliver, I’m sorry. I’m getting spanked because I was disrespectful to Dylan and then disobeyed you. Please, let me call Dylan to apologize. Please!”

“I’m glad to hear it. It will not negate your behavior but will keep me from welting your backside when I’m done with this part of your spanking. You need to learn that I will hold you accountable for your bad behavior. When you misbehave, act in a disrespectful manner, break a rule, or disobey me, you will earn yourself a very sore bottom. I will not allow you to continue to behave as you did before you became my mate.”

The strong, steady blows continued to cover her bottom, occasionally traveling down to include her sit spots and the backs of her thighs. She cried and pleaded for him to stop, but she had ceased to struggle. He continued to spank her, ensuring that her entire bottom was a deep red and that she would be good and sore when he was finished. She cried but no longer fought him as she submitted to his authority. Finally, the spanking relented and he rubbed her very sore backside in a comforting manner.

“Have you learned your lesson, little girl?”

He chuckled. “That’s not exactly what I wanted to hear but is perhaps more honest and I will honor that.”

He traced his finger down between her ass cheeks and slid between her legs. Oliver smiled as she opened her legs to him.

“That’s my good girl,” he crooned.

He slid his finger into her soaked pussy and chuckled again. “My, my, it would seem my good girl gets highly aroused by her mate’s discipline.”

“It isn’t the pain, sweetheart, it’s the display of dominance to which you are responding… as you should. Knowing that I am dominant to you and that I can and will keep you safe produces an aroused response that lets me restore the balance between us when you’ve earned yourself a spanking.”

He withdrew his finger and quickly replaced it with two as he pumped her pussy. She moaned and he could feel her body beginning to respond in a way that he knew would lead to an orgasm. He withdrew his fingers and petted her backside affectionately but as a reminder of who was in charge when she let out a sound of exasperation.

“I want you to get on your knees and lean over on the seat.”

Roz did as she was told. He pressed the upper half of her body down into the comfortable, soft leather. He rolled off the seat and onto his knees behind her. He opened his trousers and his erect cock sprang free. “Spread your legs, little girl. I’m going to fuck you from behind.”

2018-09-16
Chris
Previous: His Ranch, His Rules by Shanna Handel
Next: Claimed by the Beasts by Piper Stone