Mastering His Pet by Vonna Harper 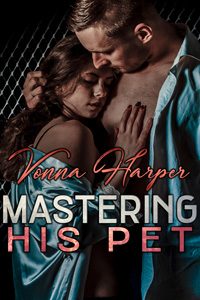 When Pace Rostel catches Carra Dalton climbing on a roof without safety equipment in an effort to repair the home of a coworker—using wood stolen from her employers—he takes matters into his own hands, putting her over his knee for a very thorough, very public bare bottom spanking.

Carra does her best to hide the shameful evidence of her arousal, but her body’s reaction to the stern punishment cannot be denied, and when she is given a new job working at Pace’s home she quickly discovers that continued misbehavior will result in even more humiliating consequences.

Haunted by his time spent at war, Pace has been training a group of dogs to help keep soldiers safe on the battlefield. Carra will be assisting with that project, but when she disregards his instructions on caring for the animals she soon finds herself sleeping in a cage and wearing nothing but a collar and tail as her firm-handed new boss begins the process of mastering his pet.

eBook Price: Currently on Sale for $0.99

He grabbed her chin. “A pet never questions her master’s decisions. If what I have in mind doesn’t break you of that, I don’t know what will.”

Defeated, she waited. Despite her helplessness, a part of her wasn’t ready for whatever this was to end. They were in the midst of something that made words inadequate. Locked in these moments, she hunched her shoulders. Her ass was on fire and her shoulders ached from the strain he’d put on them. Strangely, she was in no hurry to have the use of her arms back. This was new, revealing and confusing at the same time, a remaking of herself. Learning things about her sexuality she’d never suspected existed.

“You got a taste of this earlier,” he said as her mouth sagged. “But it wasn’t enough. It’s time to take the lessons to another level. Give you an experience you’ll remember for the rest of your life.”

“You can’t be serious.” Of course he was but she couldn’t stop the outburst.

“Get over here. Lean over the desk so your breasts rest on the top.”

Even the smallest step reminded her of the punishment her ass had taken, but she knew better than to object. Besides having clothes around her knees made walking difficult. His expression said things were going to go his way. The sooner she accepted it, the better. Her butt hole clenched at the thought of what was going to fill it, not in horror but, damn it, because she wanted more of what she’d experienced the other night. She needed to see how he’d react, whether they’d fuck.

She didn’t lean over the desk as much as fall onto it. When she was in position, she realized she’d be hard pressed to straighten without help.

“I’ve been thinking about this since I had the cage delivered,” he said as he spread her ass cheeks. “I wasn’t certain the opportunity would arise, but I suspected I wasn’t finished bringing you into line.”

She’d turned her head so she didn’t have to look at him. Now she regretted not being able to anticipate his movements. She was again at his mercy, his to handle as he pleased.

He slathered lubrication over her back opening, taking his time doing so and going ever deeper. Having his finger inside her hardened her nipples until they hurt. Her pussy became slicker, some of her juices coating her pussy lips.

After what felt like forever, he brought the plug within a few inches of her face. She though he might order her to lick it. Instead he let her watch while he greased it with what he’d used on her. His silence allowed her to remain deep in her thoughts, such as they were. Every inch of her belonged to this man.

2019-07-21
Chris
Previous: An Old-Fashioned Life by Jessica-Rose Heath
Next: Her Forever Daddy by Meredith O’Reilly