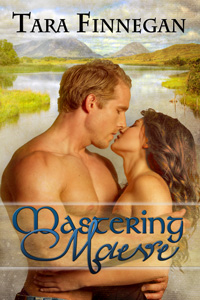 Finished with college and unable to find a job in her chosen field, twenty-four year old Maeve O’Reilly saw little choice but to return to her hometown in Connemara and work in her grandmother’s hotel. Maeve has barely walked in the door, however, when she learns that the establishment is deep in debt and an American visitor is considering an investment which could be the only chance to avoid foreclosure.

That visitor turns out to be a tall, ruggedly handsome rancher by the name of Larry Williamson, a man whose dominant personality immediately puts him in conflict with the willful Maeve. When she slaps Larry across the face during a heated argument, Maeve learns to her horror that Larry is more than ready to haul her over his knee and back up his firm tone with a firm hand applied to her helpless bottom.

Larry might like to tell himself that he has chosen to move forward with the hotel investment only to avoid any legal difficulties stemming from the spanking incident, but he knows full well that there is only one thing in Ireland he is interested in right now, and that is a beautiful, feisty, sore-bottomed young lady named Maeve.

As the days pass, Maeve quickly finds her anger at Larry fading to grudging respect, and the memory of his chastisement begins to kindle a powerful need within her… a need only the arrogant, bossy Texan can satisfy. Maeve longs for Larry to strip her bare and claim her in a way no man has before, and when at last he does all she can do is beg for more. But will the wide gulf of the Atlantic and the hard realities of a long-distance romance tear the unlikely couple apart, or will they find a way to defy the odds and forge their passion into a lasting bond?

“What happens to naughty girls, Maeve?” he whispered huskily in her ear. He rubbed his hands between her legs and felt the pool of hot silky moisture that had gathered, flooding her pussy and smearing the inside of her thighs.

“They get punished,” she breathed, trying to maintain still.

“Ask me to do it. Say ‘please punish me, sir.’” He saw her trembling, but her eyes showed excitement, not fear.

“I didn’t hear you, Maeve, can you repeat it, please?” he asserted, forcing her to say the words again more loudly. He brought the hanger down on her buttocks with full force, leaving a v-shaped track on her bottom. She jumped up.

“I warned you to stay still; move again and you’ll regret it.”

She tried her best to hold her position and succeeded well as the hanger scorched first one, then another spot on her behind. He hit her low on the tender skin just below her rounded buttocks and she couldn’t stop herself from moving.

“I warned you, and now you must be punished some more,” he said. He ran his fingers between her legs again. “You really are very bad, Maeve; you’re enjoying this too much. What sort of naughty little madam gets all creamy from a spanking?” He fingered her clit until she was ready to scream.

“Don’t you dare come,” he warned, knowing that his saying it would make it all the harder to resist. He penetrated her pussy with his fingers, gathering as much moisture as possible. He could feel her muscles tightening around him ready for climax and he cruelly withdrew them, causing her to emit a low whimper of disappointment. He used her own moisture to lubricate the tight puckered little bottom hole, penetrating it deeply with his finger. Her anus fought the intrusion and she whimpered some more. His sense of mastery was making him feel almost primitive, as a caveman dragging his mate to his bidding.

“Have you something to say?” he asked as his finger was in situ. She looked confused so he prompted her.

“Why are you being punished?”

“For being a naughty slut and taunting you, thinking you couldn’t punish me. I’m sorry, sir.”