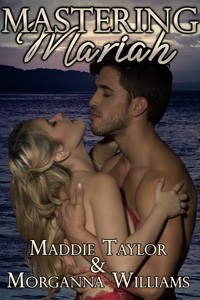 Though Dimitri De Luca is everything she could want in a man and in a master, the scars of Mariah Charmant’s past keep her from surrendering fully to his dominance and embracing the lifestyle she has always craved. Yet as her trust in Dimitri grows, so does the pleasure she experiences beneath his skillful hand, and Mariah soon finds herself submitting to him in ways she had promised herself she would never submit to a man again.

Her own romance is far from the only one on Mariah’s mind, however. As head of guest relations at the high-end BDSM-themed resort Dimitri owns and operates, she works hard to ensure that the kinky needs of the guests are satisfied, even if that means playing matchmaker from time to time. But when she goes behind Dimitri’s back to set the resort’s world-renowned chef up with a feisty little submissive who is just perfect for him, she ends up earning a thorough chastisement from the man who is both her boss and her master.

Mariah does her best to help each guest live out their perfect fantasy while keeping her own meddling behind from being draped over Dimitri’s lap too often, but her efforts are interrupted when trouble rears its ugly head in Pleasure Bay. With threats from a violent tropical storm and a dangerous individual from Mariah’s past both looming, can Dimitri battle man and nature to rescue the woman he loves before it’s too late? And if he brings her home safe will Mariah at last be ready to belong to him completely?

She moved as slowly as possible without earning more punishment. “I’m sorry I barked,” she blurted when she was in front of him.

“I’m sure you are. Too late, though,” he said with that same smile from earlier. “Get the stool and carry it to your corner, then I want you to bend over and brace your hands on top of it.”

She heard tittering behind her and almost bolted, but her odds were much improved with only herself and three of the other contestants left. Determined to be the last one standing at the end, Kelsey did exactly as he instructed although she wanted to die with embarrassment when she got into position. He could see everything from this angle, her bottom cheeks and all her bits in between them from her shy little asshole to her glistening wet lips.

She felt him before she heard him, the heat of his body rubbing against her as he steadied her with a hip and used one hand to spread her ass cheeks open. Then she felt the rounded tip of the silver butt plug pressed against her tender hole. “Ooh,” she gasped as it pushed relentlessly forward.

“Try to relax while you bear down, baby. It’ll be easier on you,” he told her gently.

As she pressed back, the plug suddenly slid home, filling her ass. She whimpered as her body stretched open accommodating the plug. When he seated it firmly, twisting it a little, the furry tail brushed her bottom with the slight movement.

“Stay in position. I’m about to make that little tail wag.” He showed her a long-handled rectangular Plexi cutting board. Then he moved it back out of sight and she heard a soft whooshing sound just before it connected sharply with her bottom. It was long enough that it caught both cheeks in the same swat. She felt the tail pressing into the small of her back with his hand and realized he’d lifted it out of the way.

Before she could completely register everything, another swat fell and then another, and an awesome sting filled her ass inside and out as each swat jolted the plug lodged within her. The paddle fell again and again until she couldn’t contain her cries and she knew she’d feel this spanking every time she sat the next day. He finished with a flurry of swats that left tears dripping down her cheeks, and when he released the tail, she was indeed wagging it in a futile effort to extinguish the fire in her ass.

“What do you need, little girl?” he asked against her ear, sending a shiver through her body.

“You,” was her breathless response, not caring at this point that they had an audience.

2016-04-09
+admin
Previous: Her Millionaire Master by Maria Monroe
Next: Claimed by the Captain by Gracie Malling