Mastering Their Human by Ivy Barrett 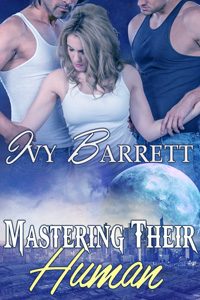 Though Kellan Felix is a military commander not known for his soft side, when he sees Brianna in one of his interrogation rooms naked, vulnerable, and on display, he is all but overwhelmed by an intense need to comfort and protect the beautiful little human. But before he can take Brianna in his arms and claim her as his own, he must learn the truth about her presence on his planet, even if that means spanking her bare bottom hard and thoroughly until she learns to obey.

As a lawyer used to fighting her battles in a courtroom, Brianna is utterly unprepared to be thrust into the midst of a bitter conflict on a far-off world, but in spite of everything her body’s reaction to Kellan’s bold dominance cannot be denied, and she soon finds herself writhing in ecstasy as the huge, handsome alien warlord brings her to one helpless, shattering climax after another.

The situation becomes more complicated, however, when an ancient being takes an interest in Brianna. To confront this threat to the woman he has already grown to love, Kellan must enlist the aid of an old ally with powerful abilities of his own, but will the two men end up fighting over Brianna or sharing both her body and her heart?

Publisher’s Note: Mastering Their Human is the fourth book of the Captives of Stilox series. It includes spankings and sexual scenes. If such material offends you, please don’t buy this book. Also note that an earlier version of this book was previously released by another publisher with the title Specter.

“What sort of punishment?”

“You know what sort. Tell Sean what happens when you displease or disobey your overlord.”

Her wide, innocent gaze shifted to him and she said, “He spanks my naked bottom.”

Sean chuckled. “Sounds like Kellan. He must always be in control.”

“Not this time.” Kellan’s night-black gaze bore into his. “You’re the one she’s denying. You will spank her if she refuses to give you pleasure.”

The thought was anything but upsetting, but he wasn’t sure this was productive. She needed to feel safe and loved, not bullied and… but she came alive as soon as Kellan took control. Her insecurity melted away and she reveled in their attention.

Kellan whipped her around and pressed her face down over his legs. He slapped her bottom four times, surprising Sean with the force of each spank. “You do not argue with your overlord.” He paused, his hand lightly stroking her rapidly pinkening curves. “I explained your choices. Obey or disobey.”

“It’s not a choice.” She sounded angry, yet breathless. “There’s no good outcome for me.”

“Really?” He spanked her some more, first one side and then the other.

Sean watched in helpless fascination. She squirmed and cried out, her hands clawing at the fur. But gradually she stilled, as if to savor the pain, and then the strangest thing began to happen. She lifted her hips and the timbre of her cries changed.

“You do not have permission to come.” Kellan paused before the next spank and looked at him. “Put your hand between her thighs and feel what discipline does to her.”

Fascinated and aroused by her obvious surrender, he crawled forward and eased his hand between her pale thighs. She was sopping wet, not just damp, but dripping down her inner thighs. Helpless against the temptation, he pushed two of his fingers into her silky core. So hot and snug, he never wanted to move his hand.

“I changed my mind, princess. You can come around Sean’s fingers.” And he brought his hand down again, and again, pausing for a second in between firm strokes.

Her thighs tightened around Sean’s hand. Was she trying to force him out or keep him in? She cried out loudly with Kellan’s sixth spank and her inner muscles clenched and then rippled around Sean’s fingers. There was no denying Kellan’s claim. Their princess loved to be disciplined.

Slowly he drew his fingers out of her pussy and Kellan caught his wrist, bringing his hand to Kellan’s mouth. Kellan looked into Sean’s eyes as he slowly, thoroughly licked her wetness from his skin.

Brianna rolled to her side, then sat up on Kellan’s lap in time to watch what they were doing. She didn’t say a word, but a knowing smile curved her lovely lips.

When Kellan finally finished with his treat, he looked at Brianna. “Your spanking was for arguing with me. Our dilemma remains. I want your mouth and Sean wants your ass. Will you submit to our desires or does Sean punish you?”

2017-07-02
Chris
Previous: His by Contract by Ava Sinclair
Next: Under Daddy’s Roof by Jaye Elise