Masters of Eden by Loki Renard 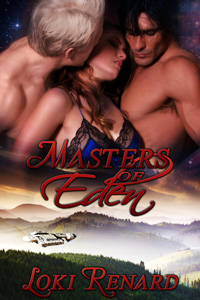 Sentenced to spend the rest of her life in a prison colony as punishment for daring to stand up against oppression, twenty-eight-year-old Eden Wells has only one goal: to escape before she can be delivered to her fate. Unfortunately for Eden, two firm-handed men stand in her way.

From the moment the beautiful, defiant prisoner first set foot on their ship, Ghost and Mixer knew this job was going to be like nothing they’d faced before. Eden’s constant deceptions and endless mischief keep the men constantly on their toes, and though each attempt at escape earns her a long, hard paddling on her bare bottom, no punishment seems able to keep her compliant for long. Despite their best efforts, the men soon grow close to their troublesome captive and her charms attract them more each day, until at last they can resist no longer.

Eden has always craved someone strong enough to handle her, but until now no man had ever come close. Though she would blush to admit it, Eden quickly finds herself craving both their strict discipline and the confident, powerful way they lay claim to her body—sometimes both at the same time. But no matter how much she longs to be theirs forever, Eden knows that escape must be her top priority. Can she find a way to keep both her freedom and their love?

“If the point of the lesson was to make me hate you, then I didn’t miss it,” she hissed at him.

“It doesn’t matter if you hate me, girl. It only matters that you learn to do as you’re told.”

Mixer didn’t waste any more of his precious breath talking. He hauled Eden back to her cell and, as she had suspected he would all along, spanked her. The punishment was delivered with her bare bottom bent over just one of his powerful thighs, the other one being used to clamp around the back of her legs and hold her in place. He spanked her with the slow, steady hard swats of a man who is making a point.

Each one of the stinging slaps jolted through her body, making her crotch ride against his hard thigh and giving her a momentary spike of pleasure as her clit was squeezed. In her heightened state of arousal, even that was enough reward. With every hard swat, she got a little bit closer to climax.

Focused on reaching that peak, she quite forgot to complain about being spanked. She also forgot to squirm and wriggle and try to avoid it. Instead, her hips lifted toward his hand as it swept down and she gasped when it landed.

“Don’t you dare enjoy this,” Mixer growled, sliding one hand up the back of her neck to curl it in her hair. He pulled her head up a little, making her arch as he spanked her hard and fast, multiplying the stimulation against both her jiggling cheeks and the hard little nub of her clitoris.

His stern growling and manhandling did nothing to make her pleasure abate; if anything it heightened everything, sent her rocketing toward orgasm as his big, strong hand branded her cheeks.

She relaxed, letting him take her weight. Maybe he’d spank her more, maybe he wouldn’t. Right then, she didn’t care. She just wanted to let the feeling flow through her.