Mated to the Barbarians by Samantha Madisen 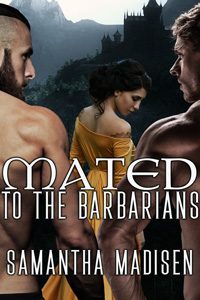 Princess Helena’s life is changed forever when her half-brother, the newly crowned king, offers her as tribute to a band of barbarian raiders in return for a halt to their pillaging. Though she does her best to view the arrangement as a sacrifice for the good of her people, Helena is shocked to discover that she will be claimed as a bride by not one, but two of the tribe’s warriors.

Not only do Helena’s new husbands prove more than ready to correct any disobedience with a firm hand applied to her bare bottom, the two huge, handsome brutes have no qualms about enjoying her beautiful body anytime and anywhere they please, even in full view of the rest of the tribe. But when custom demands that they share their new mate with the other warriors, will they follow tradition or risk tearing their society apart to keep Helena for themselves?

Publisher’s Note: Mated to the Barbarians includes spankings and sexual scenes. If such material offends you, please don’t buy this book.

As embarrassment welled inside her yet again at watching Golar display himself without a single care that all the others were watching, she rolled over, then got up on her hands and knees.

The fabric fell away from her ass, flapping in the gentle breeze and reminding her that once again she was on display for all to see.

She felt Golar come up behind her and drop to his knees. Looking back over her shoulder, she could just make out his hand stroking his own cock. It hardened as he rubbed.

Once again her body betrayed her. Her pussy began to leak, drooling fluid out of her lips that dribbled down toward the tiny nub that Vala had rubbed. Helena looked away, embarrassment burning through her entire body. Not too long ago she had been a princess at Dunkeep, a lady who had been waited on hand and foot and seen her every need attended to. There was something so much more animal about her now, about the way these barbarians lived and treated their women. As shameful as it was, her body’s reaction could not tell a lie.

Golar grunted behind her, perhaps at the sight of her slick slit or perhaps at his own rubbing. A moment later, his hard cock pressed against her soft flesh. A moment after that, he shoved himself inside.

Helena’s body bucked under the fearsome weight of Golar’s thrust. She couldn’t suppress the moan that rose in her throat as he split her open with his thick cock and piled inside. She had to brace herself against the ground and push back so her face didn’t end up in the dirt. She grimaced as she strained against him, his cock stretching her tightness.

Another low moan escaped her as the thickest part of his manhood plied her open. His heavy balls came up beneath her and slapped against her nub. He grabbed the two cheeks of her ass with his hands and spread her open.

Helena gasped at the new and unexpected feeling of her back hole being exposed to the world. It had been one thing to feel him enter her the night before. Though it had been a strange feeling, it was one that didn’t feel exactly unnatural.

Yet this, having her bottom pried apart, she felt more vulnerable and exposed than ever before.

As Golar began thrusting in and out of her, one of his fingers began to wander closer and closer to her bottom hole.

Even as pleasure washed over her, Helena’s eyes went wide.

She couldn’t even bring herself to think what he might be trying, what unexpected intrusion she would have to put up with next. Nonetheless her pussy clenched around his cock, squeezing him and causing him to utter more rough grunts above her.

Helena was finding it hard to control her voice. The dignified princess who had always been the picture of perfection at court had suddenly been reduced to not more than an animal, having to endure the barbarians’ cocks any time they pleased. It was a humiliating thought.

How can it feel so good then?