Mated to the Beast by Grace Goodwin 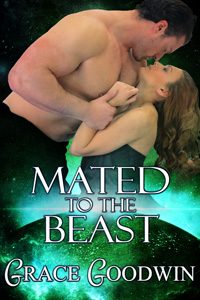 After two of her brothers are killed in battle with the relentless alien menace that threatens the entire Interstellar Coalition, Sarah Mills volunteers to join the fight in an effort to bring home her last surviving brother. When she is mistakenly processed as a bride rather than a soldier, however, she rejects the match. But her mate has other ideas…

Dax is an Atlan warlord, and like all the men of his race, a primal beast lurks within him, ready to emerge in the fury of battle or the heat of the mating fever. When he learns that his bride has chosen to fight on the front lines rather than share his bed, he sets out to track her down and take what the beast demands.

Sarah is none too pleased when a massive brute claiming to be her mate arrives suddenly in the midst of a battle, and her displeasure turns to fury when Dax’s presence disrupts her mission and leads to the capture of her brother. But after her commanding officer refuses to authorize a rescue mission, Sarah’s best hope of saving the only family she has left is to accept Dax’s offer to help, even if that means giving herself to him in return.

Though he is thrilled to have located his wayward bride, Dax quickly discovers that Sarah is nothing like the meek, submissive women of his world. If he wants her, he will have to tame her, with a firm hand applied to her bare bottom if necessary. But Dax doesn’t just want Sarah, he needs her. Can she satisfy the fearsome beast within him before he loses control completely?

I heard a growl rumble from his chest. He took hold of my wrist and tugged me down the hall. He was searching for something. When he pressed an entry button, a random door slid open and he shoved me inside. The room’s motion sensor turned on the light and I could see that he’d pushed me into a narrow room full of electrical panels. I had no idea what they did, but one wall was covered in cables and blinking lights. The floor and other walls were blue, indicating this room was maintained by engineering.

“What the hell, Dax?” I said, followed by a long string of swear words.

“Put your hands on the wall.” He looked over his shoulder and pressed a button beside the closed door, engaging the lock.

My mouth fell open. While the suggestion was pretty hot—at least in connection with the pervy thoughts his command brought about—now I was pissed.

“I don’t know what you think you’re doing, but I’m not fucking you in a closet.”

“Who said anything about fucking?” he responded calmly.

“Then what are you doing?”

I pressed my back against the wall opposite the electric panels, my hands flat on the cool metal. “What?” He was truly out of his mind.

“You need it.” Dax took a step closer. Damn it, he was so big and this room was so fucking small.

“You lied to me, repeatedly. I warned you, mate. You are mine now, and I will do whatever I need to do to make sure you know that.”

“You are crazy. Are all Atlan males this difficult, or is it just you?”

“You are still lying to me, and to yourself. In time, mate, you will come to me and tell me when you are scared, when you need my touch to soothe you, to ease your panic. Until then, it is my job to know when you need a firm hand.”

2016-08-01
+admin
Previous: A Gift for the Commander by Sara Fields
Next: A Punishment Marriage by Emily Tilton