Mated to the Dragons by Sara Fields 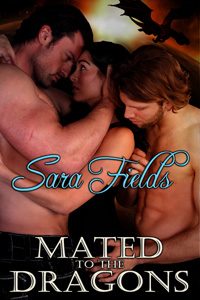 After she uncovers evidence of a treasonous conspiracy by the most powerful man on Earth, Jada Rivers ends up framed for a terrible crime, shipped off to a detention facility in deep space, and kept in solitary confinement until she can be sold as a bride. But the men who purchase her are no ordinary aliens. They are dragons, the kings of Draegira, and she will be their shared mate.

Bruddis and Draego are captivated by Jada, but before she can become their queen the beautiful, feisty little human will need to be publicly claimed, thoroughly trained, and put to the test in the most shameful manner imaginable. If she will not yield her body and her heart to them completely, the fire in their blood will burn out of control until it destroys the brotherly bond between them, putting their entire world at risk of a cataclysmic war.

Though Jada is shocked by the demands of her dragon kings, she is left helplessly aroused by their stern dominance. With her virgin body quivering with need, she cannot bring herself to resist as they take her hard and savagely in any way they please. But can she endure the trials before her and claim her place at their side, or will her stubborn defiance bring Draegira to ruin?

Publisher’s Note: Mated to the Dragons is a stand-alone novel which is the fifth book in the Captive Brides series. It includes spankings and sexual scenes. If such material offends you, please don’t buy this book.

“It’s time for the final part of your discipline, Jada,” he said softly, and she shivered.

She felt him grip both cheeks of her ass and squealed when he spread them apart. Flushed with embarrassment, she realized he was probably staring straight down at her rosebud and she shuddered with shame.

A slick liquid squirted onto her forbidden passage and he spread it around her tight rim with his thumb. She tensed when he started pushing against her bottom hole and tried to wriggle away. Slightly panicked, she tightened her cheeks, which only earned her a hard slap to the back of her thighs.

“We can continue the spanking with Bruddis’ belt, young lady. Your bottom will not be properly punished until I have disciplined you inside and out. Do you understand?” he told her firmly, and she struggled to obey.

His digit pushed against her tight rosette, stretching her in a way that was both painful and pleasurable at the same time. It burned in such an embarrassing manner that it left her trembling with the desire for it to stop and for it to continue all at once.

She felt a second pair of hands graze against her thigh and she whined as she realized both men were watching this part of her punishment very closely.

“She’s being rather difficult. Give her a second finger for fighting us. Make sure she learns her lesson,” Bruddis added, and she whined in response.

Draego’s thumb pressed into her bottom and when it finally breached her tight rim, she keened at the painful stretch. He worked his thumb in and out of her, and before long, he started pushing inside her with a second finger, despite her protests for mercy.

It hurt and she cried out as he advanced. She tried her best not to tense up, because every time she did, it grew more painful. When he had succeeded in punishing her bottom hole with two fingers, he removed his leg from the backs of hers.

“Spread your legs. Show us that naughty wet cunt,” Bruddis commanded, the breathless want in his voice clear as day.

She hesitated too long, and Draego spoke.

“Do you want the belt then?”

“No, Sir,” she quickly answered as she tentatively spread her thighs apart. Impatiently, Bruddis used his knee to push her legs open even wider and she moaned when the chilly breeze caressed her wet folds.

Both men were silent for a long time and she did her best to stay still, thankful for the fact that she could hide her face in the soft quilt on the bed. She knew they were staring, knew they could see how aroused she was in reaction to such shameful acts, knew they’d be disappointed in her lusty, wanton nature. They’d probably send her back to the detainment center within the hour.

Was that what she wanted?

Draego pumped his digits in and out of her. She moaned.

“Perfect for our bride,” Draego responded, before he finally pulled his fingers from her bottom. He grasped her around the waist and lifted her to a seated position on his lap, quickly wiping the tears from her face.

2018-02-25
Chris
Previous: Kept for Training by Emily Tilton
Next: Chosen for the Warrior by Sassa Daniels