The Medic of Brighton Creek by Adaline Raine 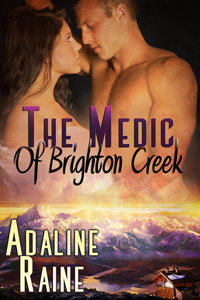 Returning to her hometown for her best friend’s wedding, Mikayla Turner doesn’t expect to run into her teenage crush, handsome paramedic Sam Brighton, within a matter of moments. But after her car runs off the road in a snowstorm, she seeks help at the nearest house and is shocked when it is Sam who answers the door—still as sexy as she remembers him.

Sam patches her up and lets her stay at his home until the weather improves, but he makes it clear that there will be consequences should she choose to disobey him during her stay. Mikayla has grown up in the years she’s been away, but she still finds herself craving Sam’s dominance, and she is unable to resist putting his warning to the test. After Sam takes her in hand and bares her bottom for a sound spanking, Mikayla has never felt closer to him, and though it leaves her blushing, his thorough, intimate medical care makes her feel safer and more loved than she’s ever felt before.

When the local doctor takes some time off, Sam steps in to help out and he asks Mikayla to stay and serve as his receptionist. She agrees, but she can’t help worrying that Sam’s attraction to her is short-lived and that one day he will tire of her and push her away. Will self-doubt drive Mikayla to leave Sam and her hometown forever, or can she face her fears and learn to trust the man she loves?

He set her on her feet by the couch momentarily, but before she could beg forgiveness, she found herself upended over his lap, boots and all.

He ignored her protests and made quick work of her pants. She hadn’t gotten around to retrieving her undergarments and felt a wave of heat flush over her at the thought of her ass and all her intimate parts quite literally on display. He had never spanked her bare before!

Sam’s hand came down with a loud crack against her cold skin and she yelped.

“Ouch!” Mikayla jumped as two more slaps hit each cheek and she jumped again as the speed of the slaps increased. “Oh! I believe you!”

“You knew the consequence. I told you as much before you danced out into the snow,” he muttered while pausing to rub each side of her bottom. “You wanted a reaction and now you’ve got one.”

“Actually you said a spanking—”

“Well, you’ve got that too.” His hand met her bottom firmly as he continued scolding her. “But you knew what you were doing.”

“You think I wanted you to spank me?” She reached back to grab Sam’s hand and glanced awkwardly over her shoulder. “Seriously?”

“Didn’t you?” He tugged his hand free and pinned hers behind her back. “Because I told you exactly what I would do and you challenged me anyway.”

“Yes, okay, I did… but not like this.” Mikayla felt a twinge run up her neck and settled herself back into position. She heard the unmistakable clank of a buckle and cringed. His belt was no picnic when she was clothed, and now that she was bare, she’d be lucky if she could sit for the wedding. “I guess I wasn’t sure you’d actually do it.”

“After this I hope you remember that I will. Now, how many do you think you earned with that dangerous romp out into the freezing cold?”

Sam had always been about the lesson and she wondered if he recalled how much harder she used to be on herself. Today, though, she didn’t feel she deserved any additional ones.

“None,” she stated firmly as she heard him snort under his breath.

“Wrong answer.” He released her hand, then shifted her off his lap so he could stand up. “Swing your legs this way, and raise your butt up.”

Mikayla hurriedly complied to move herself along the cushions and she saw the brief glimpse of a smile as she got into the position he told her to. She felt he knew how badly she wanted—no, needed—this.

“On each side?” She panicked for a moment, but his fingertips traced down over the curve of her ass as he shushed her.

“Total. Five for not listening, and five to answer the question that’s been fluttering around in your head. I’m paying attention, Mickie. And from here on out, if you disrespect me or deliberately poke for a reaction, this will be my response.”

“I don’t know how I feel about that.”

The first stroke bit against her right cheek and she hissed. It stung badly on her already tender cheeks, but she blew her breath out and continued.

“Slower.” The second stripe bit into her left cheek and again she hissed in pain.

He switched back to her right side and the stroke fell dangerously close to her sit-spot.

Mikayla yelped then gritted her teeth. “Four.” She focused on breathing as this one bit the same area on her left side.

She took another breath, but it turned into a sob as she choked out, “Five.”

The leather licked across both cheeks but strangely didn’t sting as badly as the previous ones had.

She nodded, then snuggled deeper to brace herself. “Six. Seven.”

Sam inhaled sharply over her head but strapped as fast as she spoke.

“Eight. Nine. Ten,” Mikayla finished and bit her lip. She already knew how he’d play this out, at least if he acted the way he used to. She guessed correctly as the belt seared three fast lines into her flesh, causing her to scream.

The world blotted out around her as tears poured furiously down her cheeks. Her ass burned hotter than she ever remembered it feeling. Sometime later, her breathing began to even out and the tears finally slowed. She looked up and realized Sam had not only fixed her clothing but had taken her boots off as well. He kissed the top of her head as she nuzzled under his chin.

2015-01-16
+admin
Previous: Stolen by Her Master by Emily Tilton
Next: Protective Custody by Natasha Knight