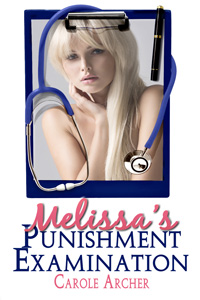 Faking sick and skipping work yet again for a trip to the beach seemed like a good idea at the time, but when Melissa’s deception is discovered the beautiful twenty-two year old finds herself in way over her head. Her boss, Dr. Ben Williams, informs her that if she wants to keep her job as a receptionist at his private medical practice then her only option is to submit to a punishment exam.

Melissa is warned that Dr. Williams’ wife Barbara, herself a nurse, will be assisting him and this will be much more than just a routine checkup. Aside from being stripped bare for an extremely intimate and deeply embarrassing examination, Melissa must also endure a thorough cleansing and a long, hard, bare bottom spanking. Most shameful of all, she will have to please her employers in any way they demand. Can Melissa accept her punishment, or will she choose to walk away and leave her job behind?

“Spread your legs and relax,” Barbara urged, as Dr. Williams took Melissa by the shoulders and pressed down, pinning her against the table. “Melissa,” Barbara said, a little less friendly this time, “bend your knees, place your feet flat on the table, and relax.”

“I can’t,” Melissa whimpered. Sighing deeply, Barbara removed the wet wash cloth from between Melissa’s legs, grasped her ankles and lifted them in the air, and then began pushing her knees back toward her chest. Melissa panicked when Dr. Williams leaned across her, took her ankles from his wife, and pulled them up over her head, leaving her knees bent slightly and her bottom raised from the table, her legs spread crudely apart. Melissa howled in embarrassment as she glanced down between her legs and saw that she was being held in a position similar to that of a baby being diapered.

Without warning she felt a sharp sting on her bottom hole. She looked down to see Barbara’s hand raised above her spread legs and she yelled loudly as the nurse’s hand landed firmly on her exposed anus once more. Melissa tried to wriggle free but Dr. Williams was gripping her too tightly and all she could do was cry out as another sharp smack stung her exposed anus.

Another smack landed and Melissa’s eyes flew open. She stared open mouthed at Barbara, who had just spanked her pussy. Melissa looked down between her thighs and shrieked as Barbara raised her hand above her mound and smacked it down firmly once more.

“Are you ready to behave?” Barbara asked her sternly, as she landed three more sharp smacks on Melissa’s helpless pussy. Melissa whimpered and squirmed, trying to move her pussy away from Barbara’s stinging spanks, but Dr. Williams held her firmly.

As Barbara’s hand hovered over Melissa’s vulnerable pussy once more, Melissa stared pleadingly into her eyes. “I asked if you are ready to behave. Are you?” demanded Barbara.

Blushing, Melissa nodded. She would agree to anything to stop another smack landing on her fiercely stinging anus and pussy.

To Melissa’s relief, Barbara lowered her hand and patted her mound gently. “Good girl,” she said, picking up the wet wash cloth and laying it across Melissa’s slit.

Melissa was mortified when Dr. Williams continued to hold her legs up, leaving her in the most humiliating position she could imagine. Despite the deep embarrassment she was feeling, though, she could not tear her eyes away from her vulnerable pussy and the shaving brush that Barbara dipped into the water before rubbing it briskly over a block of shaving soap. Melissa watched with wide eyes as Barbara held the brush against her pussy and rubbed the lather over her folds. She looked up at Dr. Williams, gripping her ankles tightly and spreading her legs wide apart, and she felt the heat rise in her cheeks once again. She couldn’t suppress a strangled moan when Barbara trailed the brush up her slit and slowly circled her clitoris before moving back down and dipping the brush between her crudely spread buttocks, tickling her anus.

2013-10-30
+admin
Previous: The Last Slavegirl by D.W. Collins
Next: The Princess and the Huntsman by Patricia Green