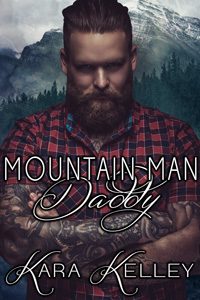 Since retiring from his job as an officer with the Royal Canadian Mounted Police, Mike Hunter has been living off grid in a cabin nestled in the mountains of New Brunswick, but his solitary existence is interrupted when he pulls a beautiful young woman from her vehicle after a crash she is lucky to have survived. Mike’s conscience overrides his desire for privacy and he brings the injured woman back to his cabin to care for her.

Avery Trent is desperate to get away from the ruthless men seeking to collect on her murdered husband’s gambling debt, and the last thing she wants is to stay put in some mountain man’s cabin until he decides it’s safe for her to leave. But Mike gives her no choice in the matter, and when she makes a run for it Avery quickly ends up over his knee for a sound spanking.

In spite of her situation, Avery cannot help feeling safe and cared for when Mike gently comforts her after her punishment, and when he takes her in his arms his dominant lovemaking is better than she could have ever imagined. Mike does not hesitate to assume the role of Avery’s firm but loving daddy, and he is fully prepared to discipline her as thoroughly as necessary to curb her reckless defiance, but will he be able to keep her safe from both her enemies and his own?

There was something about being across this mountain man’s lap that settled her. His hand landed again on the opposite cheek, and it felt sharp enough for her to wince. This time he didn’t give her time to mull it over, he just swatted again, and it bit like needles when it overlapped the other branding. More aware of the pain sensation, she clutched his pillow tighter. He continued then, steady and sharp until she felt every stinging spank with ardor and trepidation for what was to come. Could she handle all he decided she needed? The care with which he spoke as he spanked her made her start to choke up.

“Little girl, what you did was reckless, and I hope the sting on your bottom is telling you just how disappointed I am in your blatant disregard for yourself.” The swats got meatier, and at first, her eyes widened, but then she squeezed them tight. She squirmed across his knees, twisting to avoid his palm landing on an already burning spot. Her arm flew back and grabbed at his jeans-clad leg.

“I think this is just what you need to tell you how much I care about what happens to you. I haven’t known you very long, but I feel strongly that you’re a person who deserves a good life, not one who puts herself in the ground well before she’s even lived. I won’t hesitate to show you this as often as necessary, understand?”

His words had stung deepest of all, and she felt as if she had no oxygen in her lungs. She gulped suddenly, and when the air came back out it was in a wet rush that turned to a sob.

“Yes,” she gasped, as soon as she could find the word tangled among the emotion she was trying to control. More swats had her releasing her hold on Mike’s jeans and reaching back to cover her overheated skin. “I got it, Mike!” He grabbed her hand, pinning it in the small of her back. He leaned his hard abdomen against her. “Mike?” he prompted, in a whisper near her ear. “Hmm, is that what you call me?”

“Daddy.” The word flew out as the pressure of his body left her, and the sharpest spank yet landed low across both her burning cheeks. “I got it, Daddy. Please, no more!”

“Young lady, do you deserve this spanking?”

“Yes,” she choked out as he swatted, even lower this time, where the sting made her eyes pop wide. “Yes, yes, I do.” Tears came over her lids, and she let them take all the horrid fear and sadness with them. It felt amazing to empty the toxins from within her. It had always seemed pointless to cry before but now she realized it simply felt good. “Thank you,” she garbled, and he whacked so hard along the tops of her thighs that her legs kicked involuntarily.

“Ah, ah, okay!” she panted, knowing she couldn’t take much more. “I understand, and I won’t do it again!” Another yelp or two followed before she simply slumped, letting the tears flow.

“That’s my girl.” He stopped punishing her bottom and began soothing instead. His big warm hand roamed over her scorched cheeks, and he spoke gently. “Let it all go. Let me take care of you.”

2017-07-09
Chris
Previous: Under Daddy’s Roof by Jaye Elise
Next: Captured by the Highlanders by Katie Douglas