My House, My Rules by Constance Masters 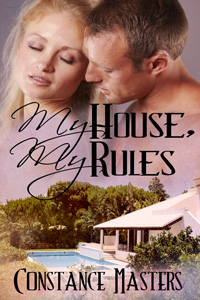 The last thing Jay needs on his first day in his new home is kids climbing over his fence and swimming in his backyard pool unsupervised and without his knowledge or permission. The incident serves as a less than optimal introduction to his next-door neighbor Alex, a beautiful young woman to whom Jay is immediately attracted in spite of, or perhaps because of, her defiant attitude.

Alex has been on her own with two children since her husband passed away three years ago, and although she would never admit it, she desperately needs a man in her life before things spiral any further out of control. In spite of the circumstances of their first meeting, Alex accepts Jay’s invitation to dinner.

When she learns of Jay’s career as an author of spanking romance novels, however, she is forced to consider the possibility that she herself might need a firm hand applied to her bare bottom far more often than she might like. Will she be able to accept the discipline required to get her life back on track, and if she does, will Jay be able to be the man she needs for herself and her kids?

Alex turned and frowned at Jay, but that was as much as she was prepared to risk retaliating. This bossy man was not her favorite person at this point. Her bottom and thighs were burning, and she wasn’t even sure she was going to make it to the kitchen. A smack on her already burning bottom got her moving though, and she was soon facing the container that held the big wooden spoon. There were several, but there was no doubt in her mind which one she was expected to take back to Jay. The biggest one was MUCH bigger than the others. She did toy for just a second with the thought of playing dumb and taking back a smaller one, but after having her backside pummeled for what felt like half the night, her survival skills had finally kicked in. She snatched the large spoon out of its container and stuck her tongue out at it before stomping out of the kitchen. When she got to the living room, she managed to walk normally back to Jay.

“Thank you,” he said taking the spoon first and then her hand.

She expected him to sit down and turn her over his knee again, but he led her instead to the back of the couch. Alex balked slightly but found herself lifted and unceremoniously tipped over the couch anyway. It was soft and very well padded, but her feet didn’t even reach the floor.

“No!” she wailed as she twisted and saw Jay raise his arm with that awful cooking implement in his giant paw. She could feel his other hand holding onto her lower back to keep her in place, but she still kicked like there was no tomorrow.

“Hold still,” Jay said as he rested a steadying hand on Alex’s lower back. He raised the spoon and did his best to ignore his errant girlfriend’s premature kicking and squalling. The spoon cracked against both cheeks at once. Both cheeks flattened and then bounced back with a red mark in the oval shape of the spoon.

“Yeow!” Alex blurted again in a combination of a cry and a shout.

Four more quick but solid whacks and she was crying loudly and begging. “Please, no more.” Her legs kicked wildly as she tried to dull the pain. “Please, Jay,” she sobbed. “It hurts so bad!”

Alex’s legs thrashed around, giving Jay a glimpse of her shiny, wet lips, while that dreaded spoon kept connecting with her burning bottom. Hard and fast flicks of Jay’s wrist paddled every inch until it was shiny and red.

“That’s it now, honey,” he said at last. “No more spoon.” He helped her to stand and pulled her into his arms for a quick hug. “Shh,” he said when she continued to cry. “When you’ve calmed down there’s just a little corner time, and then you’re done.”

2012-12-31
+admin
Previous: Bend Over, Girl by Kenny Walters
Next: Marked by the Alpha by Adaline Raine