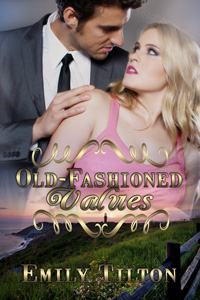 When Mark Weaver takes eighteen-year-old Sally Lanchester out on a second date and tells her afterwards that she’s earned a spanking for her disrespectful language, Sally is mortified… but another part of her can’t help but accept her punishment. After Mark spanks her bare bottom, Sally feels like her life has been changed forever. Is it possible that Mark could really offer her something she never thought possible in the twenty-first century: a man who will take her in hand, guide her, and even discipline her when he feels it necessary?

Her friends are shocked that she’s fallen so quickly for Mark and horrified that instead of being the independent, headstrong woman her parents tried to raise, she actually wants to submit to a man. But despite her friends’ approbation, Sally is soon falling deeply in love with Mark as he begins to teach her, slowly and gently, what it means to offer her body to a dominant man both for punishment and for pleasure.

When Sally’s best friend seeks to explore her own growing need for dominance and discipline, Mark introduces her to his friend and mentor and the two hit it off quickly. But when the girls’ rich parents find out that their daughters are dating men who are not afraid to spank them, they threaten to ruin the men’s careers. Will this threat bring an end to their relationships, or will the girls—and their firm-handed men—stand up and defend their old-fashioned values?

Sally felt her panties coming down, and wondered how the thing could actually be happening to her. Loving discipline: did that mean that Mark Weaver loved her? A warmth seemed to spread through her body at the thought. Mark was pulling down her panties because he loved her.

What a strange way for a girl to have her panties taken down by a man for the first time. Sally supposed she had imagined, very vaguely, what this kind of thing meant: nudity, and body parts, and feelings that friends said they liked, and her mom told her regularly and embarrassingly were completely natural.

Her mom told her that without, as far as Sally could tell, the slightest provocation. Sally would mention that she had seen this or that boy at the grocery store at home, and her mother would say, “You know it’s perfectly okay to want to have sex with him. Our sexual scripts don’t have to be from the 1900s, let alone the 1800s. Girls have exactly the same needs as boys. Just make sure you always use protection.”

What century was the loving discipline script from, then? The 1st century BC? And was it even a sexual script at all?

Oh, God. Mark could see her bare bottom. The back of her cute polka-dot panties was down at the top of her thighs. Thank God he hadn’t pulled down the front, too, though the thought, Sally had to admit, did have its attraction. But not to punish her!

The smell of his comforter, though, seemed to go together with the shamefully pleasant feeling that the boy who slept there had just pulled her panties down; that he was looking at her bottom, in the tautness of which Sally had to say she took some pride.

“Sally, why have I taken your underwear down?”

What? Why was he asking her? But… he had said that his teacher John had asked questions—and now Sally realized that to make her answer would definitely be effective in getting her not to use bad language again. She didn’t know how bad the spanking would be, but it couldn’t be much worse than having to answer this question.

“Because I said a bad word,” she mumbled into his comforter.

“What happens to girls who say bad words?”

“They get spanked.” That mumble was even softer.

“They get spanked.” Sally lifted her head, but she closed her eyes, and then she buried her face back in the covers.

Sally felt Mark’s left hand press down slightly on her waist, and then, after a tiny puff of air, she felt his hand come down on her bottom, right in the middle, where her cheeks came together.

2014-12-26
+admin
Previous: The Forbidden Castle by Dinah McLeod
Next: Assume the Position by Kenny Walters