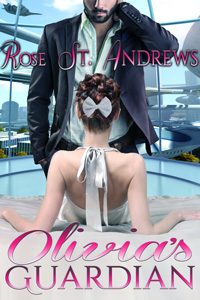 Upon learning that the human colony planet of Avalon has invented medical technology that can reverse the aging process and give anyone the body of a twenty-year-old again, Earth’s government dispatches an undercover agent to investigate. After he arrives on Avalon and assumes a new identity as a man named Caleb St. Armand, the operative’s mission is to find out everything there is to know about this revolutionary regeneration technology.

Olivia Hargee has been through the regeneration process before, so she is not surprised to be matched with a guardian—a handsome man named Caleb—to look after her during the recuperation period which follows the procedure. It comes as quite a shock, though, when her guardian proves more than willing to take her over his knee, bare her bottom, and spank her soundly as often as he feels it necessary to ensure she behaves herself while under his care.

In spite of her shame at being chastised like a naughty little girl, however, Olivia quickly finds herself enjoying Caleb’s attention. Soon she is calling him daddy and loving every moment she spends in his arms, but when she discovers his true identity and his reason for coming to her world, will that knowledge tear her away from him forever?

“Olivia, how could you be so reckless?” he said, his tone shifting from concern to scolding in an instant.

She cringed. “I sorry,” she squeaked.

He sat on a nearby tree stump, over his wet lap she went, and he spanked her right on the seat of her wet shorts. She squealed, not so much from the pain, but there was the humiliation of being spanked in public. They’d only just reconnected with her neighbors, and now they were getting to see her spanked like a child. Besides, being spanked in wet clothes really stung.

“Ouch, ow, Caleb, stop, not like this, pleeease,” she wailed.

“What, you don’t want your new friends to know you go over my knee when you’re naughty? Tough, maybe the embarrassment of a public spanking will truly teach you a lesson, little girl!” he scolded.

Olivia wailed, squirming on his lap, and yelped and begged louder. Her efforts did no good. He kept right on spanking, her chilly cheeks slowly smoldering as the heat increased. Then he paused and tugged her shorts down, and she gasped. She could see Amy and Brad and Gwen and Roger at their windows watching, and smiling.

Shit, after decades of apathy, now they decide to take an interest in what’s going on in the neighborhood.

She covered her face with her hands and howled louder, but it wasn’t due to the pain. The fire in her ass was nothing compared to the flames kindled between her legs. She couldn’t believe it, she was close to coming. Tears trickled down her cheeks, she wailed and bawled, and her mind slid into subspace.

2016-09-25
+admin
Previous: At Her Husband’s Command by Lily Harlem
Next: Her Doctor Daddy by Shelly Douglas