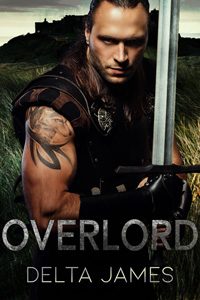 She was not asked. She was claimed.

Sloan has lived among shifters long enough to know what happens when an alpha takes a mate, but she never imagined that her turn would come to be marked and mastered. Until today…

Today Gareth of Ravenscar decided she was his, and she wasn’t given a choice in the matter.

Now, with her cheeks blushing, her bottom burning, and the evidence of his rough conquest still dripping down her bare thighs, she is beginning to understand what it truly means to be claimed.

Publisher’s Note: Overlord is a stand-alone novel set in the same world as Warlord. It includes spankings and sexual scenes. If such material offends you, please don’t buy this book.

“Gareth…” she sighed, not knowing if she meant to encourage or deter him.

The sensual rumble she could feel permeating her body combined with his soul-stealing kisses was making it difficult for Sloan to have any coherent thoughts. All she could do was feel him—his touch, his emotions, everything blended with hers and created an incredible need to be one with him. She felt her wet response pooling just inside the opening of her core.

Gareth pulled away from her, removing his hands and stepping back.

“No,” she wailed as she opened her eyes to search his face.

The evidence of his need for her was right before her both in physical form and in the sensory overload she was beginning to accept as part of his call to her.

“Yes,” he said as he reached up, taking the neckline of her gown and ripping it down the middle and away from her body.

He quickly dispensed with her corset and undergarments so that she was completely naked before him. The predatory smile that crossed his face should have terrified her, but in fact, it had the opposite effect. It beckoned her to release her own inhibitions and reason and succumb to his mating call.

Gareth lowered his head, taking her stiffened nipple into his mouth and sucking. Sloan felt her body ratchet up in awareness and arousal as his fingers parted her lower lips before plunging in and out of her sheath. His other hand splayed across her bottom as his finger ran down the crack between her cheeks to press against her bottom hole. The last rational part of her brain said she should protest but combined with his skillful fondling of her nipple and pussy, she could not form the words or actions needed to do so.

“You are my mate, Sloan, mine,” he growled provocatively.

His head came up to capture her mouth with his as he kissed her possessively and brought both of his hands up to play with the full measure of her breasts before rolling and pinching her nipples. Sloan found she had no resistance or defense against the onslaught of his need and gave up any pretense that she did.

Gareth released her only to spin her around to face the wall. He covered her hands with his as he placed them on the wet, irregular surface. When he removed his hands and she thought to do the same, he growled low, swatted her backside, and placed them back where he wanted them. This time when he released her hands, she left them in place.

“Good mate,” he whispered in her ear as he nuzzled her neck and brought his hands to run down the length of her body, causing her to quiver in response.

One hand went back to assuage the need her nipples had for his touch. The other skimmed down the front of her body to cup her mons and encourage her to step back away from the wall so that her ass was cradled by his pelvis. She could feel the enormous bulge that throbbed with his life’s blood.

Gareth kicked her legs further apart and she felt his hand slip between them as he unfastened his breeches. The only fractured thought that raced through Sloan’s mind was that she should do something to stop him; something that would allow her to say he had forced her. But as much as she could feel his need, she needed him even more.

He rubbed the head of his fully engorged staff between her ass cheeks before probing for and finding the entrance to the place where all of her feelings and senses seemed to have converged. Once he had her positioned and his cock lined up, he thrust forward powerfully, taking full possession of her.