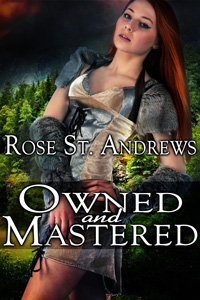 Capturing females from the wild, untamed tribes of the mountains and bringing them to market is the quickest way to make a decent living on Orien, where the practice represents the only hope to revive a lagging population. The opportunity for profit and adventure attracts Chase Pasini, but he is quickly repulsed by the techniques employed by the other hunters.

Chase tries a different tactic with his first catch, a beautiful, fiery woman named Thora, and when she submits to his control after nothing more than a good, hard, bare-bottom spanking, Chase knows he’s onto something.

Thora realizes right away that Chase is not like the other hunters. Not only does he awaken an unexpected and intensely powerful passion in her with his firm, skilled mastery of her body, he also becomes an advocate for the captive women, dispelling the myth that they are savages. But not everyone on Orien approves of the changes Chase’s methods bring to society. When a rival seeks to shut Chase down, will Thora and the other wild women come to his aid?

Chase smiled and shifted to get some things off a shelf. Thora got down on her knees next to the trough and swirled her finger through the water. She hadn’t seen so much clean, warm water since she was small and visited the hot springs in the mountains.

“Okay, Thora, clothes off, and get in,” he said, turning back to face her.

He laughed. She smiled. She liked to see him smile.

Still on her knees, she squirmed into the corner and shook her head. “No, no!”

Chase sighed and scanned the room. He picked up a stick with a round top that had lots of short bristles on one side. “Thora, you will do as I say!”

Grabbing her by the arm, he pulled her forward and over his left thigh as he knelt before her. Smack! The stick struck her. Thora gasped; the sting was ten times worse than anything she’d known since that time she fell on a rock during a hunt. Her boom-boom had been black and blue for days after that.

“Thora, you need to learn, I give the orders here. Now, I know your cute little behind is already sore, but until you behave, you’re getting a good dose of the brush,” he snapped.

Over and over the brush thing smacked her boom—her behind, and her little deerskin pants afforded her scant protection. She wailed and squirmed, but he once more proved himself quite capable of controlling her.

He released her. She sat back, and her hands flew to her throbbing behind. She’d been taught that spanks were always good prior to breeding, but this was very different. It truly hurt! Chase gestured at the trough. She cringed, but moved toward it. Standing, he helped her into it, and she let out a squeak. The warm water stung her poor behind, but then she felt his hands sliding across her body, and she managed a slight smile. His touch was gentle and the little white rock in his hand wasn’t hard, and made lots of bubbles. She held up her hand close to her face. It was covered with them and she lightly blew on them. Some popped and others floated away. She giggled. They were silly. Then she let out a loud squeak. Chase undid her clothes and tossed them aside!