Owned by the Highlanders by Lily Harlem 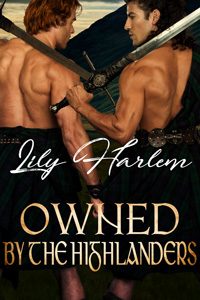 When a wounded Jacobite rebel and his companion seek shelter in her home following a clash with a group of Red Coats, Lady Moira Campbell of Leannan Creag offers her aid. But after she risks all of their lives with her careless disregard for their instructions, she quickly finds herself held in place by one stern Scotsman while her bare bottom is soundly spanked by the other.

Reid Murray and Kendal McDonald were certainly not looking for a wife when they sought refuge in Moira’s home, but her beautiful body’s response to their firm-handed dominance and strict correction is as delightful as it is obvious, and they decide to make her their shared bride.

Despite her shock at the scandalous nature of their marriage plans and their willingness to correct her behaviour in the most shameful of ways, when the two handsome Highlanders take her in their arms and claim her properly Moira is left spent and satisfied. But after her recklessness puts her in danger again, will her punishment be thorough enough to finally teach her obedience?

Publisher’s Note: Owned by the Highlanders includes sexual scenes and spankings. If such material offends you, please don’t buy this book.

“Now try to keep still. Be as loud as you want because there’s no one for miles around, we have just determined that, to hear your woe.” He paused. “Because Kendal won’t save you, in fact he’d likely take a few swats at your ass too, just so you knew he was also unhappy with your cursing.”

“Aye. I understand.” She curled her toes and screwed up her eyes. Waiting for the next spank was almost as hard as taking it.

But she didn’t wait long. Soon it was there, blistering hot and making her clench and jerk.

Reid held her tight against his body, his arm over her back and curling around her waist.

It was clear he was a good shot with his free hand, and made quick work of spanking her hard and thoroughly. Each slap hit a slightly different section of flesh, making her gasp and cry out.

Her skin heated, sweat popped on her brow, and her body rubbed against his hard legs.

“The colour you’re turning shows me you’re going to remember this wee lesson.”

“I can tell you are.” He smoothed over her flesh, caressing it, as if tracing the marks he’d made.

When he slid his fingers down the crack of her buttocks and over her asshole, she held her breath.

“Do not fear me touching you here,” he said, stilling over the tight rosebud of her anus. “For I will, and so will Kendal.”

She didn’t reply. The sensation was so new, so thrilling, but also frightening.

“Angus never took this hole, did he?” Reid tugged her right buttock so he could examine her intimately.

“No,” she managed, her eyes still closed and an image of her hole exposed to him besieging her. Embarrassment swarmed over her body like a rash. “It wasn’t his persuasion to.”

“That’s a shame. You would have enjoyed it.”

“It’s part of your sexuality, and, my love, something we need you to get used to.” As he’d spoken he’d pushed his finger into her back passage.

“No, keep still.” He held her tighter and slipped in higher, so she could feel his knuckles on her ass. “I want you to get used to this sensation.”

“Of course it is, but it won’t be. Soon you’ll crave it.” He fidgeted his finger inside of her, then withdrew.

She clamped her buttocks together. Her pussy was so wet and her clit pressed on the hard muscles of his thigh. Arousal was like another heartbeat within her. Becoming so needy, so desirous hadn’t been something she’d expected from Reid’s spanking, but oh, she wanted more, more of whatever he’d give her.

She groaned and shifted her weight on him, getting more contact on her clit.

“Keep still, this spanking isn’t over.”

“It isn’t?” She felt thoroughly punished and humiliated already.

“No.” Once again he parted her buttocks to expose her hole.