Owned by the Wolf by Jinx Neale 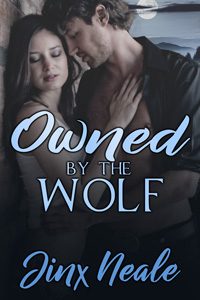 Having grown up in the foster care system, Faith Wells is accustomed to looking out for herself, and she is surprised when someone she’s never met steps in to defend her from a rich playboy trying to force himself on her. But while the idea of this rugged, handsome beast of a man looking out for her is more appealing than she would like to admit, Faith is surprised when he makes it his business to keep her safe from any further bullying or unwanted advances.

When Zane Hunter decides to bring Faith back to his home for her protection, the beautiful, feisty girl reacts with defiance, but as the future leader of his pack he knows how to deal with a headstrong female. A stern chastisement over his knee teaches her that he expects to be obeyed, but he quickly realizes that taming her will require quite a bit more than a mere spanking.

Though having her bottom bared and punished shocks and infuriates her, Faith cannot deny her body’s response to Zane’s bold dominance, and she finds herself yearning for him to take her in any way he pleases. When he reveals the truth about himself, however, she is unsure how to react. Her body aches for him to claim her, but is she truly ready to be the mate of an alpha wolf?

Publisher’s Note: Owned by the Wolf includes sexual scenes and spankings. If such material offends you, please don’t buy this book.

Zane walked across the room and dumped Faith on the couch. She stared at him furiously, her breasts heaving in outrage. He took a moment to admire the view before sitting down beside her. Damn, she was pretty. Faith leaped up, but he caught her arm and pulled her over his knee.

“What the hell are you doing?” she fumed.

“Setting a few ground rules.” Zane gave her a hard smack on her bottom that must have stung despite the cloth barrier between them.

“Get off me!” Faith screeched, trying to struggle off his lap.

“Don’t think so. You need to learn that I’m in charge and I aim to keep you safe.” Zane pressed his hand against the small of her back, holding her in place, and spanked her again, enjoying the firm, round shape of her ass. “Settle down, Faith.”

“Have it your way.” Zane pulled down her leggings, exposing a silky thong lodged between two luscious cheeks. He smacked her bottom, watching the firm flesh jiggle beneath his hand.

“No,” Zane told her. He spanked one round globe and then the other, admiring the bright pink of her skin as it heated beneath his hand. She would look gorgeous with her ass spanked red, but he’d go easy on her this first time. Faith kicked out in protest.

“Ah, ah. None of that now, you bad little girl.” He tucked both her legs beneath his thigh, angling her body to receive his next stroke. “Quit struggling, Faith. It’ll go easier for you if you don’t fight me.”

“So not going to happen,” Faith flung at him over her shoulder. “Ow! Damn it.” Her complaints kept pouring out as he spanked her steadily. He couldn’t help sliding one finger beneath the thong, tempted by the dark, inviting crease beneath.

“Get the hell off me, you freaking barbarian,” Faith said between her teeth.

Zane chuckled and gave her another five smacks, just to hear her squawk. Then he pulled up her pants and helped Faith to stand, holding her between his thighs. Her face was flushed, her hair falling loose.

“Now, let’s go over this again. You are not safe, alone in this house. I want you to be safe. So, you will come home with me until I have the situation with Lynch sorted. Clear?”

2017-07-09
Chris
Previous: Captured by the Highlanders by Katie Douglas
Next: A Strict Gentleman by Jaye Peaches