Owning His Bride by Sue Lyndon 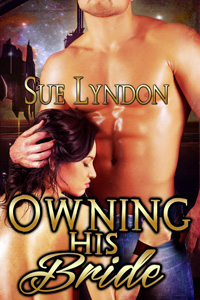 After enduring the first two years of a life sentence for a crime she didn’t commit, there is one thing Becca fears more than spending the rest of her days behind bars. When their five-year terms of service on the frozen prison planet of Kemmius are up, guards are allowed to choose a bride from among the prisoners, and the warden himself has set his sights on her.

Hunter has hated the warden from the moment he met him, and he’ll be damned if he is going to let the vile man have a sweet, beautiful girl like Becca. Not when his own term as a guard is almost up and he’ll have the chance to claim her first and make her his own.

Following a thorough, humiliating medical exam—standard procedure to ensure a potential bride’s suitability as a mate—Becca finds herself bound to Hunter forever as both his wife and his property. While her new husband quickly proves to be nothing like the cruel warden, he is still a man who expects to be obeyed, and she soon learns that defiance will be dealt with firmly.

Though she is left blushing each time Hunter bares her bottom for a sound spanking—and sometimes for other, more intimate punishments—what truly shames Becca is the way her body responds to his dominance. But even as her feelings for Hunter grow stronger and her future seems brighter than it has in many years, Becca cannot help wondering if she will ever truly be free of the chains of the past.

“Your corner time is over now, Becca.”

She peered over her shoulder and met his gaze. Her features were tense, her expression one of adorable, nervous innocence.

“Keep holding the shirt up and come here,” he said, his tone commanding.

She turned, still holding the shirt around her waist and giving him an unrestricted view of her bare mound. She crossed the room and stopped before him with her chin tucked down, her gaze on his chest.

“You misbehaved so badly that I had to send you to the corner like a naughty little girl, didn’t you, Becca?”

“You threw a fit and your behavior has earned you a spanking, Becca, and your little bottom hole is going to be punished as well.”

Her head shot up. “Wh-what?” Those pretty eyes of hers became round and wide.

“I’m going to take you over my knee and spank your bare little behind, and then you’re going to take a small plug into your tight bottom hole. I am certain such a punishment will stay with you for some time and remind you to remain on your best behavior.”

“Oh, please don’t put anything in my bottom! A spanking I understand, but the other thing… please, not that.” She clutched the shirt so hard her knuckles turned white.

“This isn’t up for negotiation, Becca. You did wrong, and after I discipline you, all will be right between us again.”

“It’s not like the shoes even hit you!” she screeched, backing up. She dropped her hold on the shirt and cupped her bottom. “Don’t I get any leniency for having terrible aim?”

“Enough talk, Becca. This is happening whether you come to me willingly or not.”

She whirled around and headed for the bathroom. Silly girl. Did she not realize it didn’t have a locking mechanism, and even if it had he would’ve disabled it long ago? He growled and ran after her, winding an arm around her waist and dragging her backward, toward the bed. In a matter of seconds he was seated and had her flailing body arranged over one knee. He covered her kicking legs with his free one and trapped her wrists together behind her back, subduing her completely.

He tossed her shirt up and began spanking her without further ado, applying firm slaps to her bum. She cried out and fought against him, but he didn’t loosen his hold on her. This wasn’t a game. He was her husband and protector now, and it was his duty to ensure she understood her place in this new life. As his wife, she needed to trust him and be quick to follow his lead. Merro was a wild planet with many exotic animals and unpredictable weather patterns. Her obedience wasn’t an option; it was a requirement if he was to keep her safe, especially until they became accustomed to the new land.

“Naughty wives get spanked, Becca,” he said, not slowing as he moved to concentrate on her sit spots. Her cries turned to earsplitting shrieks, but he didn’t lessen the impact of his blows, not stopping until the backs of her thighs and bottom cheeks glowed dark pink.