Paying The Price by Stardawn Cabot 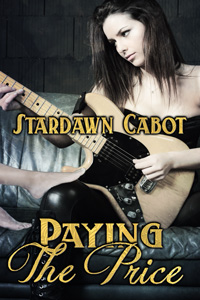 It comes as a great shock for Alexis Drake—rock star by day and highly trained secret agent by night—when she returns home to find that her girlfriend, Kasey Cooper, is missing. There are signs of a struggle, and Alex is certain foul play is involved. She immediately contacts her boss, who reluctantly admits that Kasey is a high ranking computer hacker for PLUTO, the same organization which employs Alex.

With the aid of a tracking device she planted long ago, Alex sets off in hot pursuit of Kasey and her kidnappers. Once Kasey is back safely in her arms, however, Alex discovers that her girlfriend knew all along that she was not the only one working for PLUTO. Though Kasey was rescued unharmed and the immediate threat neutralized, the lack of answers about the true motivations of the kidnappers haunts both women.

Afraid that her own carelessness was to blame, Kasey breaks down and blushingly asks Alex if she would help her be more focused with her work, even if that means a long, hard spanking when necessary. Alex agrees, and when Kasey is caught in the act of disobeying the first rule Alex set for her, she bares Kasey’s bottom, puts her over her knee, and spanks her until she is sobbing and truly remorseful.

But with Kasey’s emotions still turbulent from her recent ordeal, it quickly becomes clear that she will need more of Alex’s firm attentions sooner rather than later. Can Alex and Kasey adjust to this new dynamic in their relationship even as they work to keep Kasey safe from the enemies that have targeted her, or will the price of Kasey’s mistakes be too high for their relationship to endure?

“Me too, but after our discussion last night, I think you know what to expect now,” Alex continued, reaching out and grabbing Kasey’s hand.

Kasey was forced to take a step forward. She then sniffled as Alex wiggled down both her pajama bottoms and her panties before guiding her over her lap. “I’m not sure this is a good idea,” Kasey tried as she felt Alex pat her very exposed backside. The position was too traditional, and although it wasn’t the first time Kasey had experienced it, this time the tone was different.

“I love you, Kasey,” Alex started before she pulled back her hand and Kasey felt the first kiss of her palm. “But I’m also very disappointed. You are purposely trying to be deceptive, sneaky, and just plain naughty.”

Kasey winced as Alex paused to give her a half a dozen zingers. “Ouch! I’m sorry.”

“Not yet, but you will be,” Alex counted with another swat. “Prepare yourself, Kasey Jane. You’re about to find out what a real spanking feels like.”

Kasey swallowed hard, but before she could reply Alex opened up her attack. Within moments Kasey found herself dancing all over Alex’s lap. Alex was holding her around the waist, preventing her from slipping off, but all Kasey could do was focus on the fire that Alex was steadily stoking.

Kasey squirmed and struggled against the force of Alex’s palm, but there was no escaping it. Before she knew it, she found her breath caught in her throat. She choked back a sob as her eyes blurred and filled. Salty tears soon found their way down her cheeks, and fell onto the carpet below.

The spanking seemed to last forever, as Alex was unrelenting with her swats, yet it was over almost as soon as it began. The next thing Kasey realized was Alex was lifting her off her lap and pulling her into it. On instinct, she curled up into a ball as she soaked Alex’s pajama top with the rest of her tears. “Hey now, it’s over,” Alex cooed once the worst of her sobs had passed. “It’s over,” Alex continued, “You’re forgiven.”

Kasey sniffled before looking up into clear blue eyes. “I am?”

“Of course,” Alex managed a smile before kissing Kasey in the middle of her forehead. “I love you, honey.”

“I love you too,” Kasey returned, as her hand found its way to her throbbing backside. Giving herself a sympathy rub, she wrinkled her nose. “But damn, I never knew you could spank like that.”

Alex chuckled. “I guess that’s another secret that’s out of the bag, and one that you’ll do well to remember.” Her voice dropped in warning. “Now come on, I think we need to head back to bed.”

2014-10-16
+admin
Previous: The Commander’s Daughter by Morganna Williams
Next: The Emperor’s New Pony by Emily Tilton